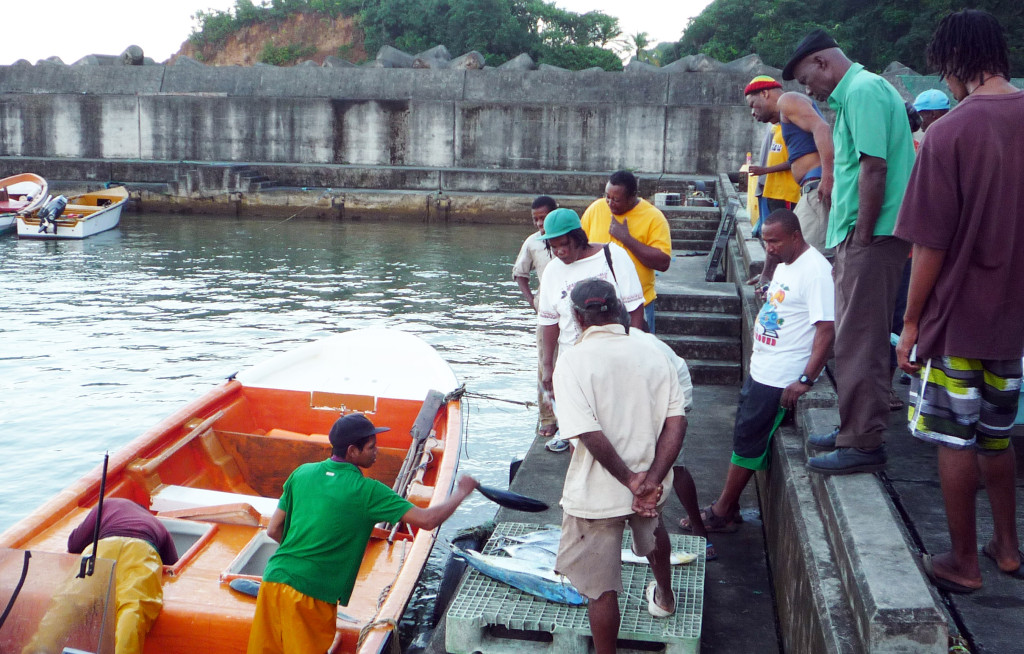 Local fishermen in Dominica bring in their catch for the day. Photo by Florida Sea Grant

Editor’s note: February 12, 2015 — The introduction of lures to Caribbean fishermen is not meant to suggest that the use of bait in the U.S. commercial and offshore sport-fisheries is not sustainable and should be replaced by lures. To the contrary, lures are being tested as a sustainable complement to the use of bait to address a specific concern voiced by Caribbean artisanal fishers – that too many small and immature pelagic fish are being taken for use as bait from fish aggregation devices used in Caribbean offshore fishing. Many Caribbean FAD fishermen believe that this action is affecting the profitability and long-term sustainability of their offshore fishery.

Think about it. Ocean-going fish can travel anywhere in Caribbean waters without needing passports. It’s why fisheries managers from across borders must often collaborate on conservation efforts.

Florida Sea Grant researchers are taking the same international approach, partnering with the fisheries division of Dominica to explore whether traditional fishing practices can be improved to increase local seafood availability while reducing pressure on overfished stocks.

The aim of one new project is to test whether the local fishermen can adopt the use of artificial lures instead of relying on wild-caught bait to bring in the catch of the day.

“Catching up large amounts of live bait eliminates the source of food for larger fish that the fishermen are hoping to catch, which can be somewhat counterproductive,” said Florida Sea Grant’s associate director of research, Charles Sidman.

“The schools of small fish harvested for bait are what attract the mackerel, dolphin fish, grouper and other species that fishermen target,” he said. “It negatively affects the overall health and productivity of the fishery.” 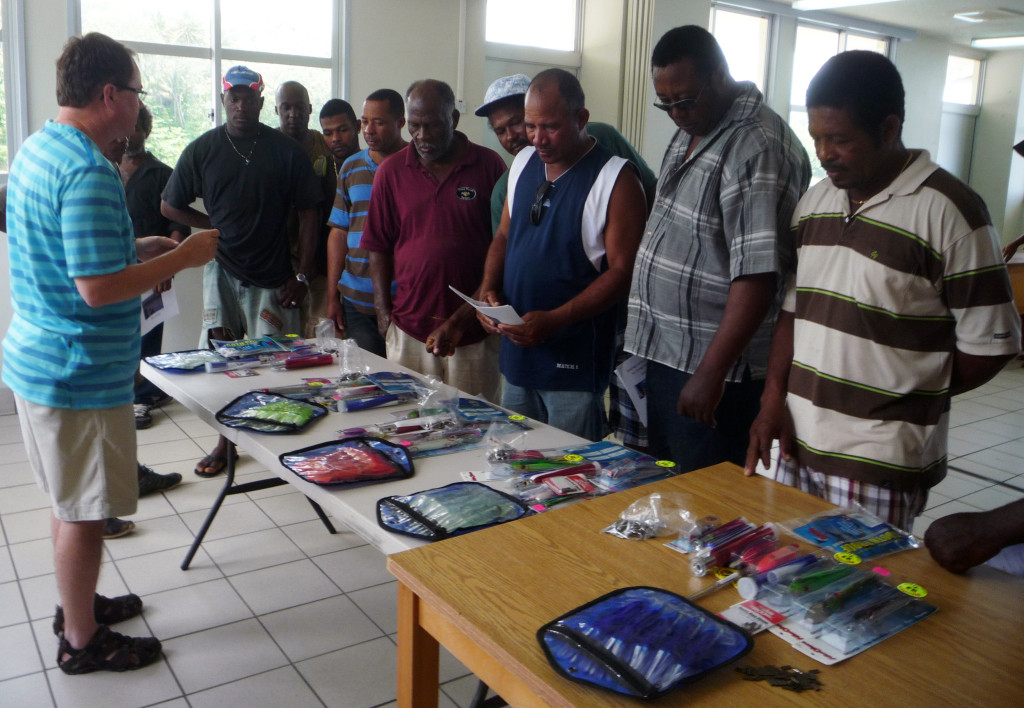 Florida shares valuable marine fisheries stocks with many island nations in the Caribbean. For some, like Dominica, fish and fisheries are an integral part of the island’s economy. Fishermen rely on healthy fish stocks to eat, make a living and preserve their cultural heritage, Sidman said.

“Floridians depend on many of the same fisheries to support the state’s recreational and commercial fishing industries,” he added.

Under a cooperative agreement with the Caribbean Regional Fisheries Mechanism, a fisheries management accord among a number of Caribbean nations, Florida Sea Grant has been building professional development exchanges and collaborative research opportunities that promote sustainable fisheries.

Kai Lorenzen, a University of Florida fisheries professor and a co-leader on the project, said the team hopes Floridians recognize the potential of their project.

“We are working directly with the local fishermen to address their immediate concerns,” Lorenzen said. “By getting feedback on the local level, we are providing information that can be useful in supporting national and regional fisheries management efforts.”

This latest project is funded by a $50,000 award from the Royal Caribbean Cruises Ltd. Ocean Fund. Additional project partners include the Caribbean Regional Fisheries Mechanism and the Japan International Cooperation Agency.

Two bait and lure manufacturers, Aylesworth’s Fish and Bait, Inc., and L&S Bait Company – manufacturer of the popular MirrOlure saltwater fishing plug, have stepped up to the plate and are donating expertise and lures to be used in the field trials.

“These sponsors have provided funding, expertise and equipment that will ensure the success of this project,” Sidman said.

Starting next month, the research team will begin experimenting with the lures to determine their potential. Much of the trials will be conducted in the proximity of fish aggregating devices, or FADS, which are broad, floating structures placed in coastal waters to attract schools of small fish seeking shelter.

The structures are often palm fronds, bamboo poles and buoys lashed together and anchored in place with heavy cement weights. The small fish attracted to FADs in turn attract larger, predatory fish, according to Sidman.

“Fishermen concentrate their efforts near FADs because they can catch more fish in shorter amounts of time, plus save fuel costs,” he said.

But though FADs are gaining popularity across the Caribbean, they can also be problematic, creating use and access conflicts among fishermen. They can also disrupt migratory patterns of wild, open-ocean fish stocks, and increase overexploitation of small fish species harvested for bait.

“Using artificial lures will help ease some of the strain on the fishery,” Sidman says. 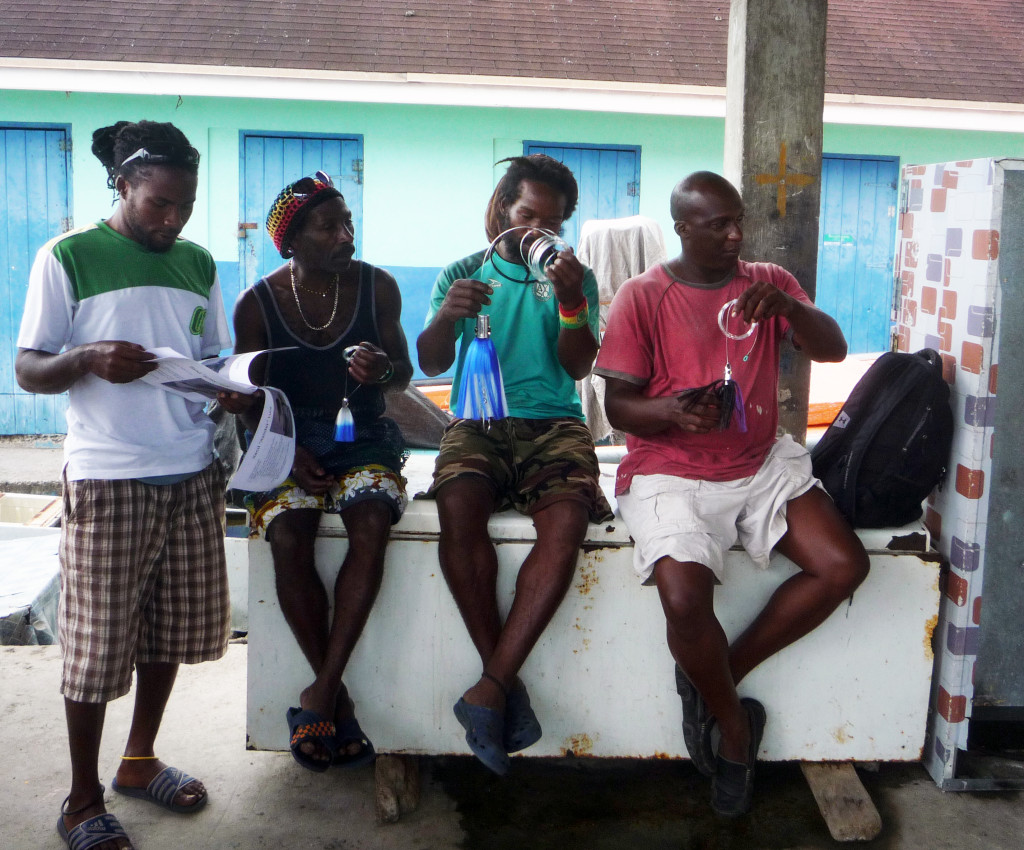 Local fishermen on Dominica read about and test out artificial lures that will be used in place of live bait. The feedback from the fishermen will give insights as to which lures are most effective. Photo by Florida Sea Grant

Once the experiments are done, he added, the team will create a guidance document explaining the success of various lure fishing techniques.

The harvesting of live bait is not the only challenge to using FADs, which is why the research team is taking a more holistic approach to managing the fishery.

During initial visits to Dominica, the team met with local fisherman to identify their main concerns. The fisherman said that heavy competition was reducing their success. When three or more fishers competed on the same FAD, their catches suffered. Part of the problem cited was a lack of record-keeping and communication.

As one remedy, the team proposed a planning chart that fishermen could use to keep track of what FADs were being fished and when.

“With the help of fishermen and government stakeholders we are developing and testing practical tools for these fishermen that can help reduce conflict and increase the profitability and long-term use of the Caribbean FAD fishery,” Sidman said.

In addition to testing the effectiveness of lures as an alternative to live bait options, future efforts of the group will include working with the locals to develop a code of ethics to facilitate greater cooperation and information sharing among government and fishermen in the management of the FAD fishery.