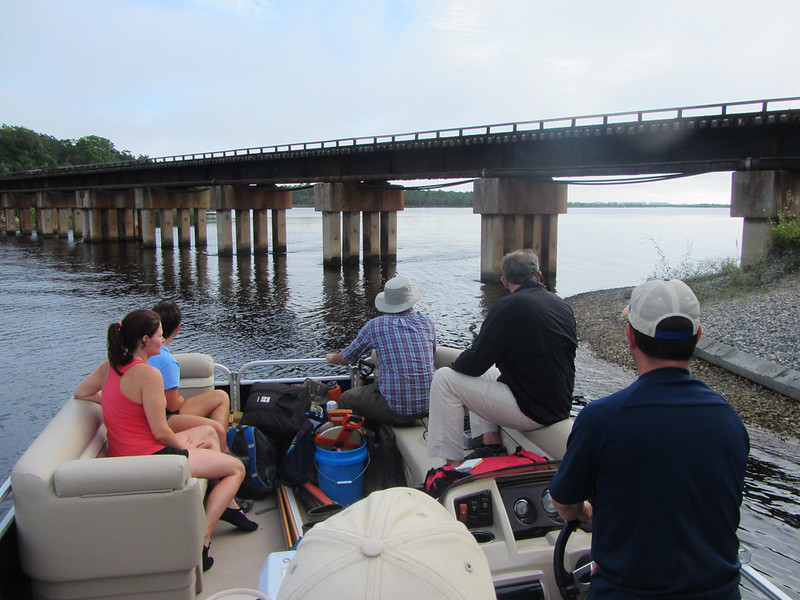 Sea Grant’s legal specialist, Tom Ankersen, and Florida Sea Grant regional agent LeRoy Creswell have sketched out a plan to evaluate the navigability of Spruce Creek, which is currently hindered by a centuries-old railroad bridge, making boating dangerous and passage for wildlife difficult.

Robert Lloyd is trying to solve a problem for Florida boaters, and he knows he’s in it for the long term.

“I’ve been warned to not expect anything to happen quickly,” he said with a laugh.

Lloyd is a fourth-generation Floridian, an avid boater and fisherman, and a homeowner along Spruce Creek, one of Florida’s most spectacular east coast water bodies.

He’s also the engine powering a grassroots effort to create awareness of navigation issues along Spruce Creek. The No. 1 target of his ire: a century-old railroad bridge running north-south across the waterway that makes boating dangerous and passage for wildlife difficult, Lloyd says. Lloyd has formed a nonprofit of area boaters and residents, Spruce Creek Rising, that is enlisting the legal research and outreach services provided by Florida Sea Grant to look more closely at the impact that the railroad trestle may be having on the waterway’s health.

“The rail bed and trestle operate like a dam, or choke point across Spruce Creek, severely restricting the flow of tidal waters, wildlife and boating navigation,” Lloyd says. “At low tide, the only passage from Spruce Creek into Strickland Bay is a slot under the south end of the trestle that is no wider than 8 feet wide and about 2 feet deep.

“It is a perilous feat of navigation to traverse the corridor.”

Sea Grant’s legal specialist, Tom Ankersen, is the director of the Conservation Clinic housed in the University of Florida Levin College of Law. He has sketched out a plan to evaluate the history of the railroad trestle and the creek’s navigability, as well as to bring clarity to the permitting process that federal, state and local agencies require for modifications to Spruce Creek. That has proved to be especially difficult, Lloyd said. As he has searched for solutions to the creek’s navigational problems related to the trestle, he has encountered a tangle of local, state and federal agencies, in addition to the Florida East Coast Railway, all entities that share responsibility for some aspect of the trestle’s operation or Spruce Creek’s management.

“I’ve gotten a lot of misdirection and runaround,” Lloyd says. “What I see is that you have about a dozen agencies with jurisdiction in and around the creek, but no one can say that that section of the creek is their responsibility.”

Ankersen will also be getting assistance from UF’s Watershed Ecology Lab (http://www.watershedecology.org/) to study how the bridge structure may have altered the channel’s flow and water quality over time. Combining the expertise of the law school with hydrologists in the ecology lab should help state and local regulators more effectively address water access issues while reducing environmental impacts. 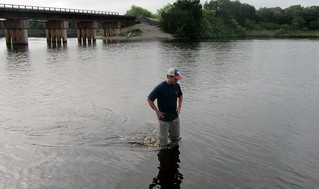 Robert Lloyd formed Spruce Creek Rising, a grassroots organization that is enlisting Florida Sea Grant to look more closely at the impact that the railroad trestle may be having on the waterway’s health.

“One of the things that’s important when you have a conflict between people and the environment, is that you have the reputable support of the University of Florida,” Lloyd says. “I’m just thrilled that Florida Sea Grant is getting involved. Having that scientific backing gives us a level of credibility.”

Spruce Creek is an Outstanding Florida Water, a designation the state gives to certain rivers and wetlands whose natural attributes and wildlife abundance may require special protection from new development or other human activities. The creek, which more closely resembles a river in parts, forms in the wetlands of east-central Florida, then meanders eastward to Strickland Bay, a saltwater estuary, and eventually flows into the Intracoastal Waterway.

Lloyd added that Florida Sea Grant outreach in this area complements what his nonprofit is attempting to do. “They’re helping us examine legal and engineering concerns so we can see who’s responsible for what, and what we have to do to get them to respond. It gives us the scientific and engineering evidence we need to support any permit request,” he said.

In addition, Ankersen’s team is helping the nonprofit examine potential sources of funding for remediation or navigation improvements if such work is warranted. Lloyd said that Spruce Creek Rising is also seeking the volunteer support of nearby Spruce Creek High School’s environmental awareness club. Student members could collect baseline data about the creek’s water quality, and promoting the importance of protecting the watershed.

With the report that he will be receiving from Florida Sea Grant at the conclusion of their effort, Lloyd says his next step will be to approach Volusia County’s environmental protection department.

I think it’s an all-around good project,” Lloyd said. “Spruce Creek is a treasure in the state of Florida. We’re raising awareness and we’re bringing attention to this issue, and that’s a huge first step.”