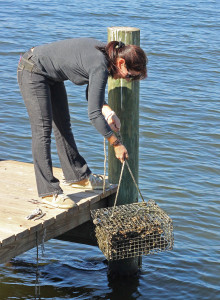 Residents are required to clean their oyster cages and collect data weekly. Once the oysters have grown large enough, they are replanted on oyster reefs in the northern Indian River Lagoon. (Brevard Zoo photo by David Saylor)

One adult oyster can filter up to 50 gallons of water each day, a capacity that conservation volunteers in Brevard County are using as part of a larger strategy to help restore the health of the Indian River Lagoon.

Nearly 1000 residents so far have signed up to turn their backyard docks into garden plots that will raise baby oysters from newly hatched larvae, or seed. When the youngsters grow large enough in 6 to 9 months, they are transplanted into special areas of the lagoon where they can make new oyster reef.

“This project restores oysters in areas where they were once found and where the water quality is good enough where they can survive,” says Holly Abeels, Florida Sea Grant agent with UF/IFAS Extension in Brevard County, who is a lead on the initiative.

“Hopefully, when they reach adulthood, the gardened oysters will spawn and continue the growth of oyster reefs in the Indian River Lagoon,” she said. “Plus, the restored oyster reefs will provide habitat for oyster larvae to set and be a source for new oysters in the future.”

Restoring oyster reefs to their historical prominence in coastal bays and estuaries is considered essential to the recovery of coastal ecosystems. In recent years, the Indian River Lagoon has seen an 80 percent decline in oyster populations, negatively affecting the water quality of one of the most biologically diverse estuaries in the world.

Experts say that although the lagoon seems to have reached a “tipping point,” it still has a chance to recover. And the oyster, a humble bivalve that lives its life basically stuck in the mud, can play a starring role — with a bit of bringing along from local residents.

In early 2014, Brevard County granted Brevard Zoo’s Oyster Gardening Project $150,000 to recruit coastal residents who would serve as citizen scientists by helping to grow oysters from their personal docks to be used in future restoration projects. Abeels, who helped start an oyster gardening program during her previous employment at the University of New Hampshire, was recruited to the team. She conducts volunteer training workshops and helped author the oyster gardening training manual. 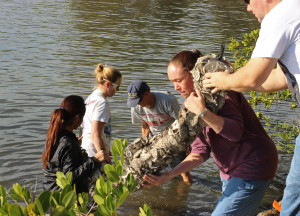 More than 950 oyster gardeners thus far have dedicated approximately 135,000 hours to the program. These volunteers grow oysters inside specially designed cages suspended from their docks, and collect data on growth, survivability and recruitment. Once the oysters reach the right size, the shellfish are collected and used to populate oyster reef restoration projects in the Indian River Lagoon.

Three sites, Marsh Harbor in Merritt Island, Scout Island in Melbourne Beach and Nicol Park in Port St. John have been selected and permitted for the first pilot reefs. The new reefs have the potential to filter up to three million gallons of water per day.

Abeels said anyone in Brevard County with a dock, or access to a dock on the Indian River Lagoon can be part of the program. But, even if you don’t have a dock, you can still be part of the solution.

“There is also an oyster buddy program. Oyster buddies take the same training, so they can help people take care of their habitats,” Abeels said. “For example, they can take care of volunteer’s habitats while they are on vacation.”

She said volunteers are responsible for cleaning the cages in which the oysters are grown about once a week by using a brush to scrub the outside and rinsing it with water. This helps to keep water flowing freely through the habitat so the oysters can feed and breathe.

Volunteers weigh the habitats both before and after they are cleaned, looking for oyster spat, or larvae, on an attached recruitment shell to see if there’s any natural recruitment of oysters in the area. They report their data online at brevardoystergardens.org each week.