You are here:
Two Florida Sea Grant agents are developing water quality monitoring projects in South Florida that enlist residents and volunteers on the front lines of citizen science.

Both programs train individuals to take monthly water samples at adopted sites, analyze the samples, and input their readings in an online database. Not only can they see the results in real-time, but the data is given to local resource managers to fill a gap where county or state monitoring does not exist.

“We needed a way to help educate the public about the issues and the concerns regarding Biscayne Bay,” said Krimsky.

She added that it also meets the needs of helping to monitor water quality in areas that are no longer being monitored in the county due to reductions in funding.

Further south in the Florida Keys, Shelly Krueger, Florida Sea Grant agent with UF/IFAS Extension in Monroe County, is developing a similar program, Florida Keys Water Watch. Her program monitors residential canals, most of which were dug in the 1950s and 1960s to provide waterfront living for a growing population. The canals were built in such a way that water circulation was obstructed, posing a threat to marine life and causing other long-term environmental impacts.

“Several years ago, Monroe County completed the Monroe County Canal management plan and after surveying more than 500 canals, they found that about a third of them were in a state of what they called poor water quality based on low dissolved oxygen,” Krueger said. 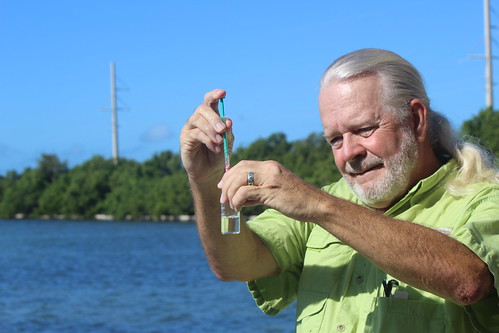 Walt Fahey collects a water sample from his neighborhood boat basin in the Florida Keys. He uses the data to educate other homeowners about water quality and to encourage them to help keep it healthy.

She takes the data collected by the volunteers and presents it to the Environmental Protection Agency and the Monroe County Board of Commissioners.

Both programs are actively seeking volunteers. Walt Fahey, a retired dentist and resident of Marathon Key, uses the data he collects to inform citizens in his neighborhood about best practices for keeping their boat basin clean.

“The Water Watch program has really given us numbers, that’s something that people can relate to,” Fahey said. “I send out newsletters that explain dissolved oxygen in the water and let them know where the levels are at. This lets us know where things are maintaining, where they’re improving, and which areas need more attention or improvements. The community is very supportive and receptive of it.”

He also added that although he has a science background, you do not need one to become a volunteer. As part of the program, Krimsky and Krueger provide a four-hour training that explains each step of the testing process.

“The kits that Shelly has put together, they’re very simple. Anybody can do it if you want to take the time to just step-by-step follow the directions,” Fahey said. “If you’re interested in doing it in your neighborhood, it’s really a neat thing to show the members of your community.”

Krimsky said that although her program requires access to a boat, since the sites are located at various sites along the Bay, there are still other ways to volunteer in Miami.

“There are always possibilities and ways to participate through volunteering, through sponsoring sites monetarily, or just through donations and active learning and passing the message along in terms of Biscayne Bay Water Watch,” she said. “The more people know about water quality and the health issues that affect the Bay, the more power we’re going to have behind it to do something.”