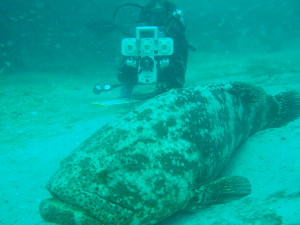 Angela Collins, coordinator of the Great Goliath Grouper Count, uses video to record her sighting of this large fish during the 2015 event. (Photo by Angela Collins)

UPDATE: Due to Tropical Storm Colin, the survey period has been extended to include any data collected between June 3 and June 21.

Starting June 3, Florida Sea Grant agents and specially-trained divers and anglers around the state will spend 10 days keeping their eyes peeled for the large and charismatic goliath grouper during the seventh annual Great Goliath Grouper Count.

During the count, participants will fuel up their boats and head offshore to record the number of goliath grouper they observe during visual surveys. The data will be provided to state agencies who can use the information during future stock assessments of the species.

Harvest and possession of goliath grouper has been prohibited in both state and federal waters since 1990. In the 1970s and ’80s, the population dramatically declined due to increased fishing pressure from commercial and recreational divers and anglers.

Since the closure, the population in Florida is showing substantial signs of recovery, especially along Florida’s southwest coast, according to Angela Collins, Florida Sea Grant agent with UF/IFAS Extension in Manatee County. But before any change in regulations can be considered, managers need to have enough documented evidence, Collins said.

“That’s why this data is needed every year. This event provides a snapshot of goliath grouper presence and abundance at known artificial reefs around the state,” said Collins.

The annual count was started in 2010 by citizen volunteers, charter captains, county government staff and scientists from the Florida Fish and Wildlife Conservation Commission. It was a way that trained volunteers could provide a cost-effective alternative to collecting valid data that would otherwise exceed the capacity of existing research programs.

Early efforts focused primarily in waters between Pinellas and Collier counties off the southwest coast. Today, the survey has expanded to include diver data from the Panhandle through the Keys to the east coast of Florida.

“These data tell us about trends in the abundance and size distribution of goliath grouper across different habitats, depths, and regions,” Collins said.

The event also gives fisheries managers a chance to involve divers, fishermen, scientists, and others interested in goliath grouper recovery efforts. Collins says she hopes it will continue as long as the state can use the information.

“If you continue to collect data through the years, you get a nice picture of what’s going on at the sites that you’re surveying,” she said. “If we survey the same spots using the same methods each year, as time goes on, we can see how population structure may be changing or expanding,” she said.

For quality control purposes, interested divers are required to go through training to ensure data collection is consistent across all surveyors, so that it is usable by state agencies. If you would like to participate, or to learn more about the Great Goliath Grouper Count, contact Angela Collins at abcollins@ufl.edu