Editor’s note: This article is adapted from the Marine Aquarium Societies of North America at http://masna.org/wp-content/uploads/2015/03/MASNA-Press-Release-Dr.-Junda-Lin-Memorial-Fund.pdf 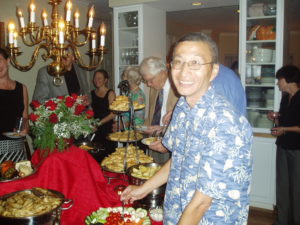 Junda Lin, captured here in an informal moment during a reception, served many years as a campus coordinator for Florida Sea Grant at FIT. A memorial fund has been created to encourage marine science scholars to make their research more widely available. Florida Sea Grant photo.

Lin, a former Florida Sea Grant funded researcher and campus coordinator at the Florida Institute of Technology, was a well-known aquaculture researcher who developed technologies for farm-raised marine ornamental fish species as one way to counter impacts from wild collecting. The fund will offset costs that students incur when publishing research as open access articles. Lin died in March, 2016, at age 55.

In traditional research publishing, the reader incurs a cost to access the article. Open access articles are available online at no charge, but the author is charged a fee upon publication. Lin’s memorial fund will help cover the cost of that fee, encouraging researchers to publish open access articles more often.

The fund is sponsored by various individuals, aquarium clubs, businesses and universities, and is accepting donations from the public.

Lin was a professor of biological sciences at FlT and the director of the Institute for Marine Research. His lab studied the basic biological processes of several shellfish and fish species, evaluated their aquaculture potential, and developed cultivation technology. He served on the editorial boards of the Journal of The World Aquaculture Society and the Journal of Shellfish Research.

Lin mentored dozens of undergraduate and graduate students in the field of ornamental aquaculture, including many in the marine ornamental trade and MASNA.

More information about the Junda Lin Memorial Fund, including the donation and application links can be found on the fund’s website at http://masna.org/masna-programs/memorial-publishing-fund/