A Special Message From the Director of Florida Sea Grant

On Friday, May 5, 2017, the President signed a $1 trillion spending bill to fund the federal government through September.

Although the elimination of the National Sea Grant College Program was proposed by the President in late March, the new bill includes $72.5 million to keep the program operating for the remainder of the fiscal year.

We would like to thank you for being a voice for Florida Sea Grant and Sea Grant programs across the nation. The new spending bill directly reflects the support our program has received over the last few months in the form of letters, phone calls and social media posts to Congress.

While this is great news, the process of keeping Sea Grant funded is ongoing. Even though the FY17 budget is in place, Congress is already beginning to formulate the budget for FY18.

The President’s proposed budget again zeroes out funding for all the nation’s Sea Grant programs.

We remain confident that Sea Grant will be funded again in FY18 because the program has 50 years of strong bipartisan support in Congress. Sea Grant is a unique and highly practical program. Of the funds that Congress appropriates, 95 percent leave D.C. and go to the 33 state programs. Those funds are used to support research and outreach to solve problems identified as most important by coastal businesses and communities.

Issues we address include helping coastal communities deal with flooding from sea-level rise, ensuring that seafood consumed in the U.S. is safe, integrating emerging technologies into the U.S. aquaculture industry, and many more. Sea Grant also has supported tens of thousands of students with scholarships and fellowships.

For every federal dollar invested in a typical state program, another three dollars is invested by local, state and private funding sources – partners that highly value the impacts of our program. The return on investment of federal dollars is even greater – nearly 9 dollars of economic benefits to the nation’s coastal zone for every one dollar of federal funds provided each year.

If you value the Sea Grant program, please check back to this website for updates on this evolving situation.

We have new information regarding the President’s request for immediate budget cuts to the National Sea Grant College Program and Florida Sea Grant. On Monday, April 3, 85 members of the House of Representatives signed on to a “Dear Colleague Letter” to the House Appropriations Committee, urging strong bipartisan support for the full funding of Sea Grant in 2018. A similar letter was also circulated in the Senate with 65 signatures.

This development is good news. I suspect that the comments you have voiced to members of Congress are being heard. We thank you again for your continued support.

Sea Grant is not out of the woods yet. We still do not know what will occur with the remainder of the 2017 budget, which exists in the form of a Continuing Resolution for Appropriations that expires April 28. Congress begins a two-week recess on April 7. Indications are that budget decisions will be addressed when Congress reconvenes on April 25.

I am quite confident that the wise decision making that happens in the House and Senate conference about the 2017 and 2018 budgets will be favorable to Sea Grant as has occurred in all of its 50 years as an authorized federal program. As I’ve noted before, this program has strong bipartisan support in Congress because of the wise manner in which we spend federal dollars to address the problems that are affecting our coastal businesses, residents, communities and environments with solutions based in good science.

If you value the Florida Sea Grant program, please continue reading this post for how you can help.

There is a potentially dire situation for the Florida Sea Grant program unfolding in Washington, D.C. On Tuesday, March 28, the President sent Congress a request for drastic cuts to many government programs related to everything from the environment to health and human services and education – in order to immediately free-up funds to increase defense spending.

One of the programs that is slated to be cut, by $30 million this year, is Sea Grant. That wipes out the remaining budget of the program and it would terminate the program the day such a budget cut became effective. If Congress approved of the cuts we could be gone in a matter of months.

This would immediately stop us from providing scholarships and fellowships to Florida college students, immediately stop funding for numerous active research projects addressing critical issues affecting Florida’s economy and environment, and immediately stop our ability to have huge benefits for the state of Florida as summarized in this one-pager. Many people would likely lose their jobs. The same would happen in the other 32 Sea Grant programs around the nation. 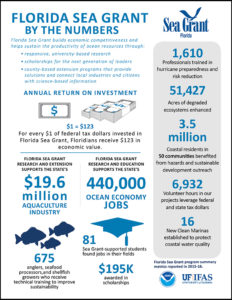 Sea Grant has a greater return on investment of federal funds than any other government program we are aware of, and we are unique in using federal dollars, leveraged with private, local and state dollars, to address the issues identified as most important by our coastal constituents.

If you value the program, you can help. The President only makes requests –  it is Congress that takes actions when it comes to the budget. The strong bipartisan support of Sea Grant by members of Congress has not changed. Yet there are many programs now on the chopping block or facing draconian cuts in this fiscal year. If members of Congress receive a huge number of supportive emails from people who deeply value a particular program, it will make a large difference in regard to the outcome.

If you decide to reach out to members of Congress about Sea Grant, we suggest some sample language to be used in your email. It contains specific language that members and staff will recognize, pertaining to this proposed cut or elimination of the program.

Note that hard copy letters take months to arrive in Congressional offices, but emails are taken immediately. Some offices have online forms to provide comments.

For the House of Representatives you can easily search for names of members of Congress and contact information here: http://www.house.gov/representatives/

For the Senate you can search here: https://www.senate.gov/general/contact_information/senators_cfm.cfm

I am writing to urge you to reject the Administration’s proposal in the FY 2017 Security Supplemental that would cut the National Sea Grant College Program (Sea Grant) by $30 million. Such a reduction with five months remaining in this fiscal year would effectively terminate the program in August 2017. We also ask you (or reiterate our previous request to you) to reject the Administration’s FY 2018 proposal to zero out and terminate the Sea Grant program.

Sea Grant is a cost effective, competitive, merit-based partnership program that helps local, state, and regional ocean and coastal entities address economic and environmental challenges through research, extension, and education. The federal funding provided by Sea Grant is matched with other non-federal resources and 95% of all federal funding leaves Washington, D.C. to fund research and other activities that assist coastal businesses and communities in addressing critical issues affecting their economies and environments.

On the national scale, in 2015-16 the Sea Grant program helped generate an estimated $575 million in economic impacts; created or sustained nearly 21,000 jobs; provided 33 state-level programs and 534 communities with technical assistance on sustainable development practices; worked with about 1300 industry, local, state and regional partners; and supported the education and training of almost 2000 undergraduate and graduate students. The Sea Grant program achieved this with a Congressional appropriation in FY 2016 of $73 million, which, as mentioned previously, is leveraged with matching funds provided by states, universities, and other sources.

Attached is some additional information on the Sea Grant program in our state [you can use the PDF included in this post]. Thank you for your attention and support on these important matters.

FOWA Scholarship for Outdoor Communicators Now Accepting Applications for 2022-23
May 18, 2022
Go to Top