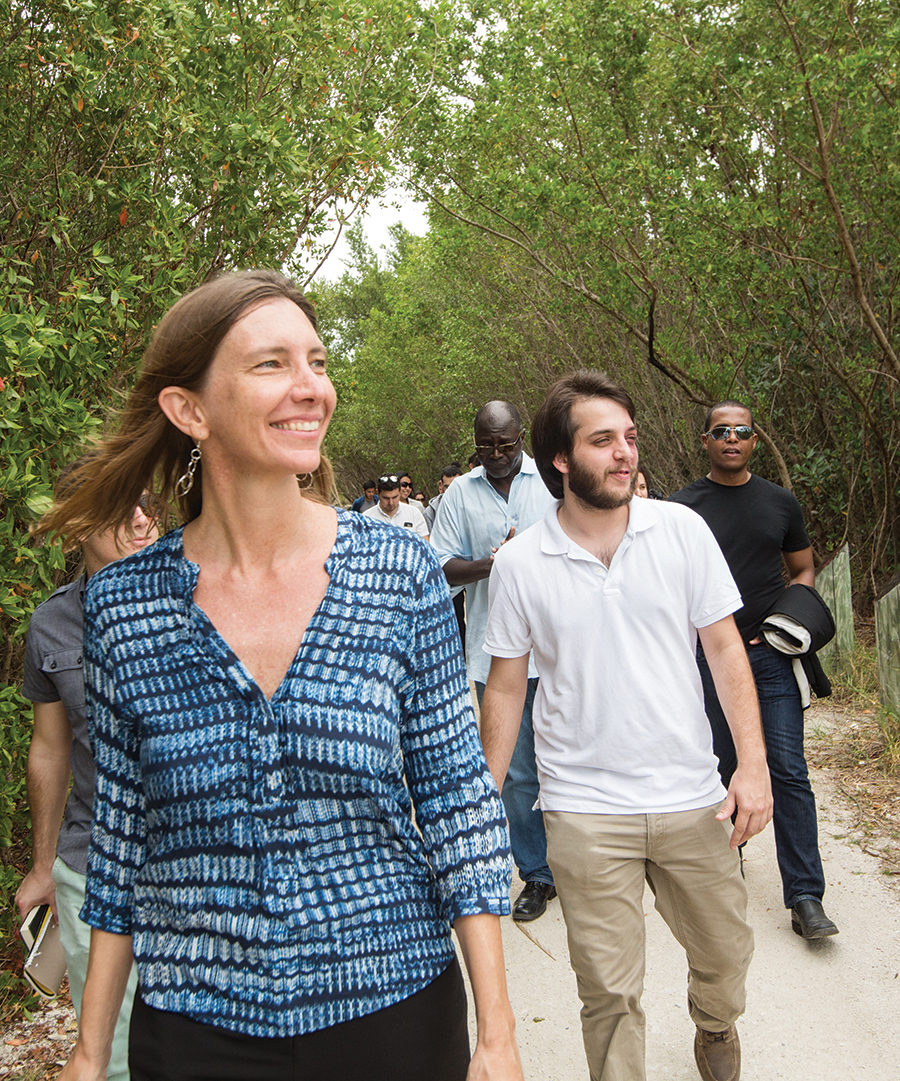 In the Florida Everglades, peat soils critical to maintaining wetland elevation are collapsing due to rising seas and saltwater intrusion.

Florida Sea Grant researcher Tiffany Troxler, in collaboration with the South Florida Water Management District and the Everglades Foundation, has been conducting experiments to help guide management decisions regarding the Everglades and the peat soils that hold the famous wetlands together.

These peat soils are the fundamental building blocks of the Everglades, the single largest marsh system in the U.S. and home to many tropical foundational species. The vast wetland also protects humans from hurricane damages and generates millions of tourist dollars each year. Not to mention, the Everglades also helps filter water before it reaches the Floridan aquifer that supplies drinking water to one out of three Floridians.

But peat soils are fragile – too little fresh water can dry them up, while too much salt water causes plants to die and peats to wash out, creating open-water slurry holes where the peat used to be. Sea-level rise is only expected to make the problem worse.

Troxler, through field and laboratory manipulations, is quantifing just how sea-level rise will impact peat soils in the not-so-distant future.

“Peat soils provide the fabric that sustains large areas of the Everglades National Park. Increasing inputs of salt water into freshwater peat wetlands as a result of saltwater intrusion is resulting in higher salinities than we’ve ever observed in these types of wetlands,” said Troxler, who serves as the director of the Sea Level Solutions Center at Florida International University.

“Given the low-lying land surface of the park, maintaining this fabric in terms of its elevation is critically important to preserving these wetlands.”

Results of the project show that increased salinity in peat soils has resulted in loss of peat structure and decline in the growth of plants that help form the peat.

Understanding these sea-level rise impacts has profound implications for future water management, policy development and restoration decisions in the Everglades, where more than $20 billion of state and federal tax dollars will be spent to enhance freshwater flow for ecological restoration and human uses.

Troxler hopes her findings can help guide future management options to slow the rate of peat collapse and create options for adaptive management of sea-level rise in the Everglades.

“This is an example of critical Sea Grant research, especially if it can be broadened to provide sustainable, adaptive, predictive and economically important understanding of the drivers and processes that hold together the very fabric of the Everglades,” Troxler said.

According to Fred Sklar, who heads up the Everglades section of the SFWMD, the local sponsor of the restoration project, “This science provides a better understanding of the hydrologic needs of Everglades peat, which in turn, helps us and the U.S. Army Corps of Engineers design sound Everglades restoration plans, and improved Everglades infrastructure.”

Ultimately, the results from this research can be used by those agencies to optimize freshwater delivery projects planned in the southern Everglades.

FOWA Scholarship for Outdoor Communicators Now Accepting Applications for 2022-23
May 18, 2022
Go to Top