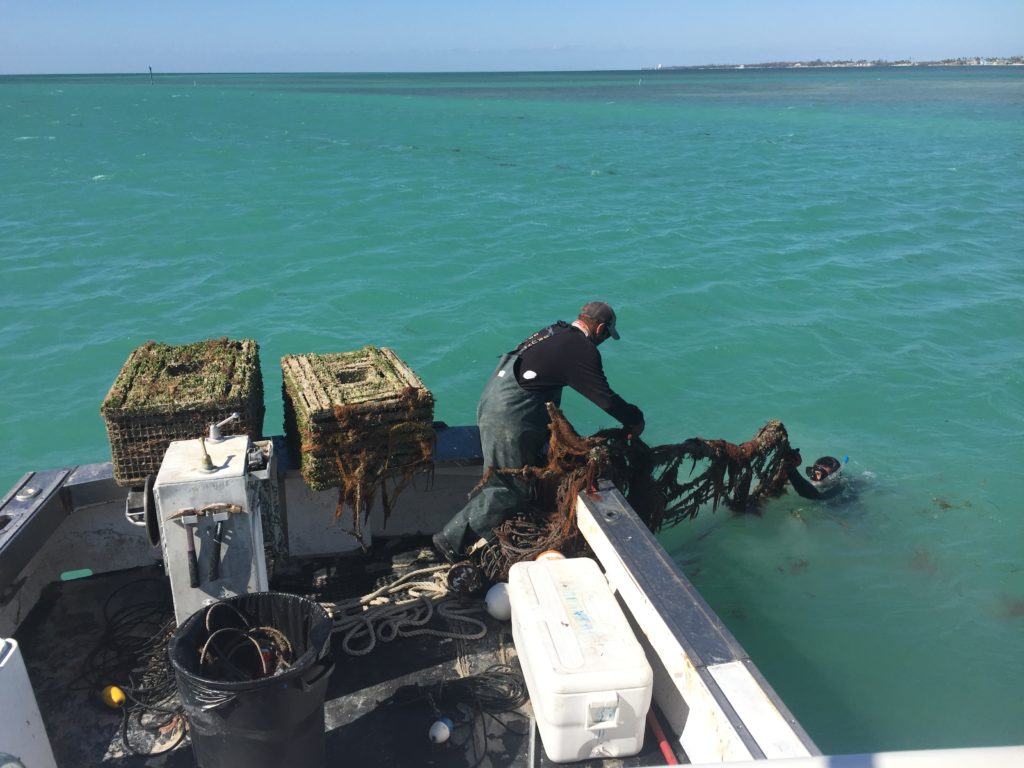 Editor’s note: This story was originally written by Samantha Grenrock on UF/IFAS News.

Hurricane Irma displaced more than 150,000 spiny lobster traps in the Florida Keys last year, sometimes miles away from their original locations. But a novel eyes-in-the-sky solution has saved the industry nearly $4 million, according to the Florida Keys Commercial Fishermen’s Association (FKCFA).

This kind of response wouldn’t have gotten off the ground if it weren’t for the association’s strong working relationship with Florida Sea Grant, part of the University of Florida Institute of Food and Agricultural Sciences Extension, said Bill Kelly, executive director of FKCFA.

“Our aerial reconnaissance, in cooperation with Florida Sea Grant and the Florida Fish and Wildlife Conservation Commission, established a platform for rapid assessments, should and when the next hurricane comes our way,” Kelly said. “It also provides a strategic road map for gear cleanup and helps in establishing not only locations but also estimated costs and time-frames based on previous efforts.”

To implement this new approach, the Association recruited two of its professional spotter pilots and their aircraft with costs covered by emergency funding provided by the National Sea Grant program to Florida Sea Grant. Sea Grant also equipped each plane with GPS-enabled cameras and additional personnel via the emergency funding.

During three days of overflights, each aircraft covered approximately 2,100 miles and took a total of nearly 15,000 GPS enabled photographs. This information was then uploaded to geographic information system computers, plotted on nautical charts of the Keys and distributed to stakeholders, FWC, law enforcement and local government officials.

“Successfully piloted in Florida, aerial reconnaissance could be the new response protocol for other coastal communities affected by severe weather,” Kelly said.

Florida Keys fishermen, who fuel the second largest economic sector in the Keys, were faced with the time-consuming task of searching for lost gear. Irma hit in September, just a month into the lobster season, which goes from August to March. Spending that period recovering gear, rather than taking in catch, would have been money lost for fishermen and the Florida Keys, Kelly said. “We needed a rapid response,” he said.

After Hurricane Irma, commercial lobster traps were scattered, tangled and displaced.
With help from Florida Sea Grant, the traps were quickly located,
allowing fishermen to remove them from the water and get back to business.

“Most commercial fisherman in the Keys earn the majority of their income from the lobster catch. They are a vital part of the Florida Keys — for them to get out fishing soon after the storm helped them financially and reduced the stress of recovery,” she said.

Krueger continues to work with the Florida Keys National Marine Sanctuary to coordinate clean-up efforts. Together they have converted the original GPS maps into Google Earth. This Google Earth version is overlaid with a grid, allowing crews to clean-up of remaining debris systematically. “Hopefully a year from now, we can show that all the grids have been cleared,” Krueger said.

Krueger’s work is just one example of UF/IFAS Extension and the public coming together in the interest of productive fisheries, said Karl Havens, director of Florida Sea Grant.

“Florida Sea Grant is very strategic,” Havens said. “We use our federal funds and matching state and local funds to tackle issues identified as top priorities by a wide range of coastal constituents. We also can be nimble and bring unique expertise to bear when a crisis occurs. We did this after the BP oil spill in the Gulf of Mexico, and we were able to quickly mobilize to find a solution to help recover lost lobster traps after Hurricane Irma.”