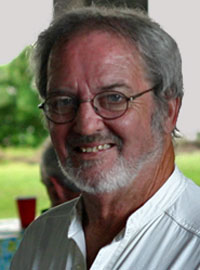 LeRoy Creswell, the Florida Sea Grant regional agent who leads outreach in coastal ecosystems and aquaculture, has received the prestigious “Meritorious Award” from the National Shellfisheries Association, “in appreciation and recognition of his outstanding efforts and leadership on behalf of the NSA.”

Creswell ended his term as president this year, but he will continue to serve on the executive committee as past-president for two additional years. In that capacity, he will preside as chairman of the “Past-Presidents” and “Awards” committees during his tenure. 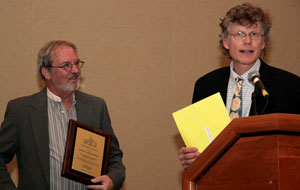 LeRoy Creswell (left) was presented the Meritorious Award plaque at the National Shellfish annual meeting in 2013.

Creswell is also the co-editor of the National Shellfisheries Association Quarterly Newsletter, and is on the editorial board of the Journal of Shellfish Research.