Florida Sea Grant agent Geoff Wallat recently helped coordinate the deployment of new artificial reefs off the coast of Taylor County. This short video provides an appreciation for the complexities of trying to accurately place tons of concrete material in open-water seas. 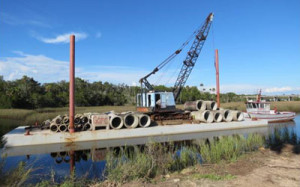 Organizers recently announced that the next Florida Artificial Reef Summit will be Jan. 13-15, 2015 in Clearwater Beach.

Artificial reefs provide additional habitat for important fish species such as grouper and red snapper, as well as many kinds of marine life. They also provide increased angling and diving opportunities, which have positive economic impacts for local businesses onshore. 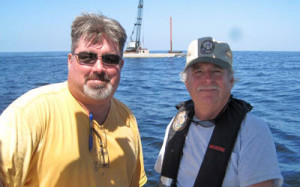 Recently, Geoff Wallat, the Florida Sea Grant agent with UF/IFAS Extension in Taylor County, oversaw the deployment of two new artificial reefs on the Buckeye Reef, a 640-acre public reef site near Keaton Beach, Fla., that is one of the deepest sites permitted in Taylor County. Wallat was assisted by Jody Courtney, a member of the Taylor County Reef and Research Team.

The first reef deployment consisted of 120 concrete cubes specially designed to enhance habitat for grouper and other popular sport fish. The cubes were placed in a cross pattern, extending north, south, east and west from center coordinates located at 29o 38.879 N, and 83o 54.767 W. 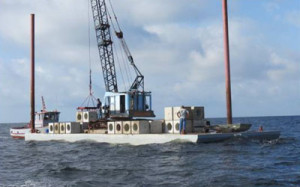 A barge offloading reef cubes moves into place. Thirty patch reefs consisting of 4 cubes per patch were dropped in a cross pattern.

The deployment was funded by a grant from FWC in cooperation with matching funds provided by the Taylor County Board of County Commissioners.

The second deployment consisted of 75 tons of concrete culvert pipe and other material, donated by the Florida Department of Transportation. In addition to DOT’s support, additional contributions of funds and labor were provided by a broad community effort that included the Taylor County Tourism Development Council, the Gainesville Offshore Fishing Club, the Taylor County Reef Research Team, and property owners George Edwards and John Taliaferro who provided space for the group to stage and load the materials. 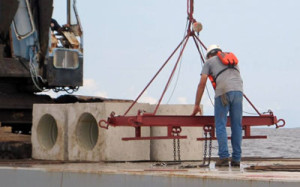 This reef was funded by an FWC grant with matching funds from the Taylor County Board of County Commissioners. 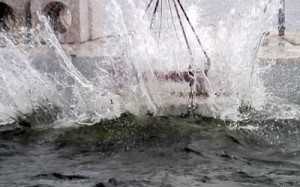 A still photo barely captures the dramatic splash caused when a crane drops reef material into the Gulf of Mexico. Watch the video above!