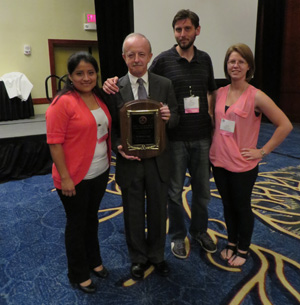 Michael Kane, a native plant researcher at the University of Florida who has used Sea Grant funding to develop novel ways to grow and store sea oats and other plants essential to beach dune restoration, has been awarded a lifetime achievement award from the Society for In Vitro Biology.

Gary Hennen, president of Oglesby Plants International, an ornamental plant wholesaler in Florida, nominated Kane for the award because of his ability to cater his research to fit the needs of the plant industry.

“Over the years I have found that Dr. Kane is not only an excellent researcher in the field but also looks at problems from a commercial perspective that is somewhat rare in academia,” Hennen said. “His work on restoring wetland and other challenged ecosystems was groundbreaking.”

Kane developed plant tissue protocols to enable native growers to rapidly produce commercial quantities of native sea oats to alleviate production chokepoints caused by dependence on plants grown from seed. The ability to grow the plants with this efficiency is crucial to dune restoration after a major storm. 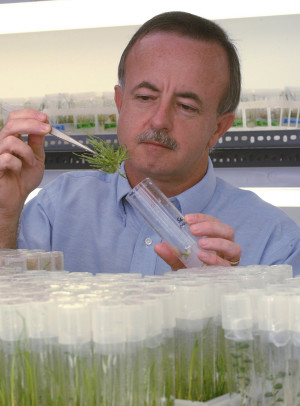 Kane is an environmental horticulture researcher at the University of Florida. The cost-effective techniques he has developed to rapidly grow native plants like sea oats alleviate production chokepoints common to post-hurricane beach restoration projects. (Photo by Josh Wickham, UF/IFAS)

With initial funding from Florida Sea Grant, Kane began researching sea oats in the 1990s after Hurricane Andrew and other storms eroded miles of coastline, creating an increase in demand for sea oats. When he first began his research, nurseries could only grow the plants from seed, which was limited and time-consuming.

The shortage of sea oats and seeds is what prompted Kane to come up with a solution.

Using a process called micropropagation,  Kane grows small samples in the form of shoot buds in nutrient-rich gels that spur rapid development. The shoots are then moved to a greenhouse, where they continue to grow in preparation for their final move to the beach.

“Seed production put a bottleneck on the commercial sector’s ability to supply sea oats, and this seemed to be a good way to work around that,” Kane told UF’s Institute of Food and Agricultural Sciences in 2004.

When Kane began to collect sea oats from different beaches around the state, he also confirmed environmental officials’ speculation that the plants were indeed genetically diverse.

Kane said the genetic differences are what allow the plants to adapt to specific location conditions. But he didn’t believe the diversity should restrict sea oats from being transplanted to beaches in need. Instead, it was his goal to find the strongest variations of the plant for each type of beach. 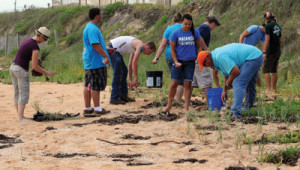 With additional funding from Sea Grant, Kane also developed a method to cryogenically freeze thousands of sea oats samples from all major populations along Florida’s coasts. The bank of frozen specimens will be used to ensure native plant growers have access to the types of sea oats native to specific areas.

“There is a need for millions of these plants, and this is the sort of work that is going to allow us to fill that need,” said Hennen, whose company uses micropropagation to commercially produce plants. The company hopes to be one of many that put Kane’s research to good use. “That’s not only going to be good for our beaches, but it’s potentially a major boon for a lot of businesses as well.”

Kane, who has been a UF research professor for  27 years, has also chaired or been a member of more than 60 graduate student committees. He frequently delivers short courses and summer workshops to commercial plant growers and biology teachers on new plant culture and storage techniques. (In August, Kane will lead a workshop focused on the effects that climate change may have on plant selection process for restoration.)

He said he wasn’t aware he was nominated for the award, but was honored to receive it. “Given the individual scientists who have received this honor in the past, I’m in rarefied air,” he said.  “My biggest pleasure is to see students and faculty become successful, to see the progress they’ve made.”