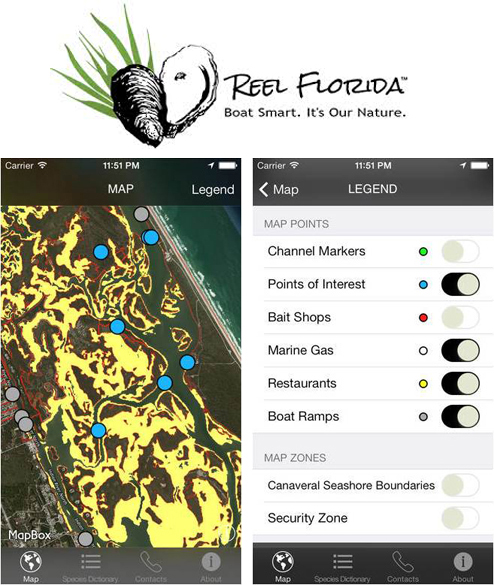 Cruising down the channels and canals of Florida’s expansive Indian River Lagoon, many coastal boaters and fishermen appear unaware their onboard habits may be threatening what lies beneath — the oyster reefs, seagrass beds and sensitive shorelines that provide homes, nurseries and meals for the waterway’s fish and wildlife.

That kind of knowledge now fits right in the palm of their hand. A new iPhone app has just been released that tells boaters in real time when they’re approaching areas where extra care might be needed.

“Boaters actually strike intertidal oyster reefs very regularly, and the same with shallow sea grass beds,” said Linda Walters, a biology professor at the University of Central Florida and one of the app’s developers.

“Those are good people who are environmentally conscious, but they just don’t have the knowledge of the system. During high tide you really don’t know where the oyster reefs are unless you’ve been there many times.”

The free app is focused on the Mosquito Lagoon, the northern portion of the much larger Indian River Lagoon, a north-south body of water that spans as much as a third of Florida’s east coast. The 156-mile long system has been recognized as among the planet’s most diverse environments of plants, animals and aquatic organisms.

One of the app’s most popular features is an extensive, illustrated guide to fish, birds and plants that reside in the lagoon. Walters said the “Species Dictionary” is a handy tool for boaters and fishermen to identify the local wildlife. Boaters can also turn on layers to display channel markers, points of interest, bait shops, marine gas stations, restaurants and boat ramps.

“Once people know the app is there, they are using it for whatever their need is at that particular moment,” Walters said. But she added the main goal of the app is to keep the lagoon’s environment healthy and thriving by giving boaters a tool to help kick their bad habits.

The idea for the app’s development, Walters said, came as a result of research showing that within the Indian River Lagoon, boat wakes were one of the reasons for the considerable amount of oyster reef decline and shoreline erosion the waterway has been experiencing.

Because the lagoon’s average depth is just under 5 feet in non-dredged areas, boat wakes can dislodge clusters of live oysters from existing reefs, killing oysters at the margins and eventually the entire oyster reef itself. Boat propellers also churn through and damage seagrass beds, a habitat so valuable to marine life that it’s estimated to be worth $329 million to the recreational and commercial fishing industries annually. Over the past decade, one third of seagrasses in the Mosquito Lagoon showed evidence of boat prop scarring.

“When you’re only in about two feet of water that boat wake can really have catastrophic effects on the organisms,” Walters said. “So we’re trying to get people to just change their behaviors a little bit and the phone app helps with that.” Walters added that hitting an oyster reef can also cause extensive damage to boats and outboard motors, adding another reason to avoid them.

Walters says she hope this app will help educate the boaters who live in Florida, as well as the millions of out-of-state visitors. But her team also realizes smart phone apps aren’t for everyone.

“We’ve already produced the traditional brochures and maps and a percentage of people like those. But we are trying to cover more of our bases,” Walters said.

She and DeLorme are currently evaluating the app’s success by conducting phone surveys and observing boater behavior. She said the preliminary results are promising.

“Once people realize it exists, they love it. I mean, why would you not love it?” Walters asked. “It’s very simple to use, it’s accurate within about a meter, so you know exactly where you are. Plus it has tons of other features.”