Mary Reed Is The Winner Of The 2022 Skoch Scholarship 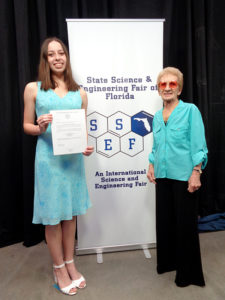 Each year, Florida Sea Grant awards the $1000 Skoch Scholarship to an outstanding high school senior competing in the State Science and Engineering Fair of Florida. The scholarship recognizes promising young researchers in a coastal or marine science-related field.

This year’s winner is Mary Reed, a senior in the International Baccalaureate program at Ridgeview High School in Jacksonville, Florida.

For her award-winning project, entitled How Does Nitrate Absorption Differ Between the Rhizophora Mangle, Laguncularia Racemosa, and Avicennia Germinans, Reed investigated which species of mangrove absorbs the most nitrate–a nutrient commonly found in fertilizer run-off which can fuel harmful algal blooms. 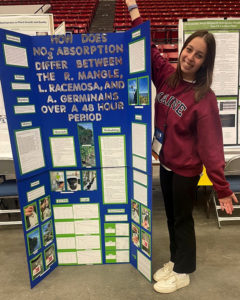 Reed showcases her award-winning project, which investigated the mangrove’s substantial ability to absorb nitrate—an ability, her abstract states, that can be utilized to mitigate the effects of eutrophication.

“Mangrove’s ability to absorb nutrients really stuck out,” Reed noted during preliminary research, “In AP Environmental Science, we did a huge unit on eutrophication and how that produces algae. I remember nitrates being a key factor in algae growth and I thought mangroves could help with nitrate absorption and then decided to do an experiment.”

Reed’s interest in mangroves first sparked while visiting Tampa for a ballet intensive during her junior year of high school. During her trip, she visited nearby Weedon Island Preserve, and fell in love with the beauty of the preserve. “There were mangroves everywhere – just as far as you could see. ”Mangroves don’t really grow where I’m from in North Florida, so I was just fascinated.”

To conduct her study, Reed collected three samples of the red, white, and black mangroves from the Marine Resource Council Mangrove Nursery. After submerging each mangrove sample in a bucket of water with a nitrate level of 20 ppm, Reed tested each bucket’s nitrate level every six hours. She performed this water monitoring for 48 hours and recorded a decrease in nitrate over time. All of the white mangrove trials reached a final nitrate level of 0 ppm and were overall the most absorbent. 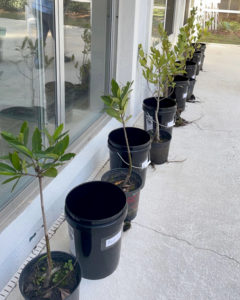 During Reed’s trials, she observed the white mangrove had the fastest absorption rate in comparison to its black and red counterparts.

“Although white mangroves were the most effective at absorbing nitrate, all mangrove species did prove to be effective, said Reed about her findings.

“I was also impressed that Mary connected her observations during a simple family adventure to solving a problem Florida is actively facing,” said Florida Sea Grant UF/IFAS Extension Agent Brittany Hall-Scharf of Hernando County, who served as judge at the State Science and Engineering Fair of Florida. Hall-Scharf had the honor of selecting Mary Reed for the Skoch Scholarship. “She designed an experiment to discover how much nitrate these amazing trees can remove from coastal systems, hoping that the knowledge she gained might help with eutrophication and coastal nutrient issues.” 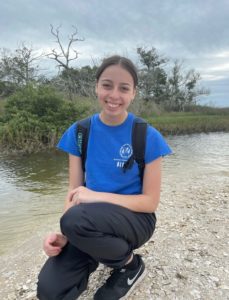 Reed at the Guana Tolomato Matanzas National Estuarine Reserve Reserve, a special place that jumpstarted her interest in science.

After graduating, Reed plans to attend the University of Miami and pursue a bachelor’s degree in marine science. She hopes to minor in climate policy, and eventually, pursue a master’s of professional science degree. in preparation of a technical career in the STEM field. Mary’s career interests range from field and conservation work to the policy side of science.

“The money will go to fund my college tuition and research opportunities at The Rosenstiel School of Marine and Atmospheric Science within the University of Miami, where they are actually conducting mangrove research right now,” said Reed. Funding for the scholarship is provided by the Skoch family of Boynton Beach, in memory of Charles “Chuck” Skoch, an avid fisherman, boat captain, and Florida resident who prematurely died in an automobile accident at age 51.