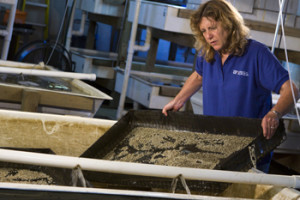 Editor’s note: A portion of this story was originally written by Brad Buck on UF/IFAS News.

For nearly two decades, Leslie Sturmer, an aquaculture specialist with Florida Sea Grant and UF/IFAS Extension, has played an integral part in saving Florida’s heritage fishing communities from economic hardship. For her efforts, she has recently been awarded the Distinguished Service Award by the U.S. chapter of the World Aquaculture Society.

“I’ve been in aquaculture my whole life,” said Sturmer, “I’ve lived here for 22 years. I’m married to a clam farmer. I’d like to think I provide assistance to the industry.”

Clam farming is now Florida’s most lucrative marine aquaculture industry, with a statewide economic impact of about $39 million. But the outlook hasn’t always been so promising for Florida’s fishing communities. When the state’s traditional gill net fishery closed in the 1990s, commercial fishermen, seafood wholesalers and marine supply dealers faced negative economic consequences. Sturmer led an extension program that would help out-of-work fishermen transition to clam farming as an alternative employment opportunity.

Cedar Key, a picturesque fishing village on Florida’s Gulf coast, has grown into the epicenter of the state’s clam farming industry. It produces the majority of the state’s total clam crop, with an annual farm gate value of $12.3 million, according to the most recent UF estimates. The industry now grows more than 125 million clams per year, and provides the Cedar Key area with more than 500 jobs.

“To be honored by your peers is very rewarding,” Sturmer said. “I’d hate to think it’s because I’m getting old. To see Cedar Key continue to be a working waterfront community, to see this community be supported by aquaculture is more rewarding than the plaque. But the plaque is recognition that your peers see you’re doing worthwhile work.”

“This is one of the most prestigious honors that a professional in the field of aquaculture science can receive,” Payne said.

Sturmer works with the shellfish aquaculture industry in, as she says, “whatever their needs are.” She is currently funded by Florida Sea Grant to advance the production and distribution of a promising new native shellfish, the sunray venus clam. Through large-scale demonstration, education and hands on training, she hopes to bring sunray venus clam culture to seed suppliers, growers and wholesalers, revitalizingthe industry that is currently based exclusively on hard clams. John Supan, a professor and oyster specialist at Louisiana State University and Bill Walton, associate professor of aquaculture and aquatic sciences at Auburn University nominated Sturmer for the award.

“If there were a Hall of Fame for aquaculture outreach, extension and research, Leslie Sturmer could retire today and be assured of a place in this Hall for what she has accomplished already in her great career,” Walton said.