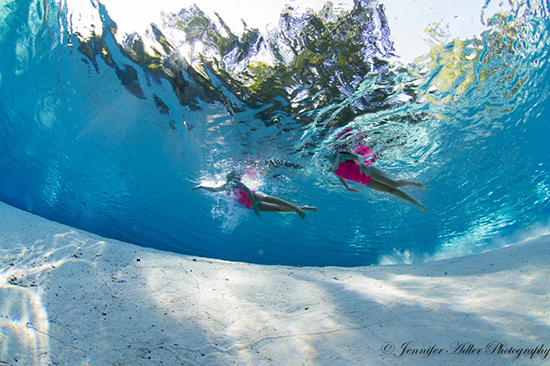 Three aspiring scientists, all graduate students at the University of Florida, have been awarded $1,000 each as the 2015 recipients of the Florida Outdoors Writers Association scholarship for outdoor communicators.

“This is the first time FOWA has given as many as three awards,” according to Dorothy Zimmerman, communications director for Florida Sea Grant and chair of the FOWA scholarship committee. “It reflects the highly competitive profile of the 17 entries we received from colleges and universities across the state.”

The awards are given by FOWA annually to recognize students whose career goals are to communicate a love and appreciation for hunting, fishing and other aspects of the outdoor experience. In the past seven years, FOWA has awarded more than $10,000 to aspiring writers, photographers and filmmakers.

Jenny Adler, who holds a bachelor’s degree in marine biology from Brown University, is becoming a well-known underwater photographer of the freshwater springs in north Florida. She publishes both articles and photos on her Magnitude 1 blog, and has mounted a traveling exhibit of large-format photos titled “Illusions” to increase public awareness about threats to the springs. “Illusions” debuted at the Santa Fe College President’s Hall gallery in October, 2014, and has also traveled to the Jacksonville Museum of Science and History. It will be on display at the FOWA annual conference in August.

“Although sharing the beauty of the springs and aquifer is important, it is also crucial to raise awareness about their decline,” Adler says. “Photography is one way for me to help Floridians make the connection between their lives above ground and the fragile springs and aquifer below.”

Carrie Schuman holds a master’s degree in marine science and technology from the University of Massachusetts, and a bachelor’s degree in marine and freshwater biology from the University of New Hampshire. Her research at UF focuses on aspects of oyster restoration and/or culturing in Florida. She has published extensively in both science journals and lay newsletters like the Gulf of Maine Times Online.

Schuman says writing about her experiences in the marine environment is a challenge that expresses a profound personal curiosity about the outdoors using exacting language honed by scientific training. “I also firmly believe that writing about the outdoors and all its mystique, often paired with photography and other forms of art, may be one of the best ways to convince the general public to maintain and protect it,” she adds. “For those that have limited means to visit some of the world’s natural spaces, writing can be a transformative means to education, understanding, and personal investment.”

Jordan Skaggs holds a bachelor’s degree in biology from Missouri State University, and formerly worked as a fisheries biologist for the Florida Fish and Wildlife Conservation Commission. He is an avid snook and bass fisherman who has already authored an article in Fisheries and co-authored an article in B.A.S.S. Times on the effects of certain lures on fish growth and survival.

Skaggs has been a long-time reader of fishing magazines who looks forward to sharing results of his own fisheries research with future fishermen. “Confinement within the ceilings and walls of an office never sat right with me,” he says. “In order to feed my curiosity, I had to find a way out of the office and into the natural environment. I now publish my writing with hopes of exciting young fisherman to learn more. I now write columns for the same publications that originally stimulated my interest in the fisheries of Florida.”

The three recipients will be attending the annual FOWA conference in August in Lake City and speak briefly at the awards banquet. In addition to their monetary award, each receives a one-year student membership award in the association to encourage their participation in association meetings and activities.