Carlos Martinez, a Florida Sea Grant statewide agent who specializes in ornamental aquaculture and aquaculture education, was recently awarded an Honorary State Degree by the Florida Future Farmers of America Association. “The Honorary State Degree is the highest honorary award presented by our state organization,” according to the FFA letter of award. “Its purpose is to recognize those individuals who greatly contribute to the advancement of agricultural education and provide outstanding service to the FFA program.” Martinez was given the award for his ongoing participation in the Florida FFA’s Aquaculture Career Development events, which are FFA competitions that allow middle and high school students to practice real world skills as they relate to agriculture. He has been a supervisor at these events since 2009. Martinez explained that prior to 2009, FFA’s Career Development events focused solely on agriculture, but in the mid-1990s, Florida began to recognize aquaculture as a part of agriculture. 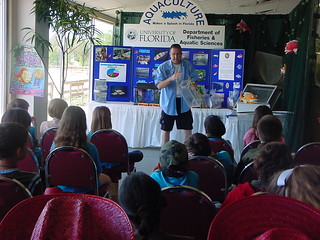 Martinez explains the basics of aquaculture during one of the Tampa Bay Area’s Ag-Venture events.

“Plain and simple, aquaculture is a great teaching tool,” he said. “Each student that participates is unable to avoid the allure of a live animal, especially one that lives underwater.”

He explained that students who use the curriculum learn chemistry, math, geography, biology and physiology while raising their fish. Each step in the process requires a different skill set. Martinez said some teachers embrace this technique, and take students on internal field trip to their school’s aquaculture facility.

“The learning is limitless while the students are 100 percent interested in keeping their fish alive,” Martinez said. 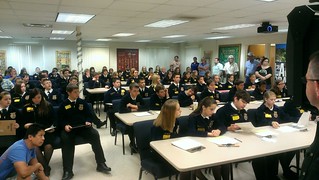 “These competitions, aquaculture or otherwise, not only give the kids a hands-on opportunity to see what the industry is doing but also prepare them for the future,” Martinez said.

He added that while he is honored to have received the award, he believes he owes some of the credit to the students.

“The way I see it each and every student that participates in the FFA is in their own way advancing agriculture and in this case greatly assuring the future of aquaculture,” Martinez said. “I look forward to the FFA Career Development Event each year and I cannot tell you how impressed I am with the students as they represent their individual schools during the aquaculture competition.” 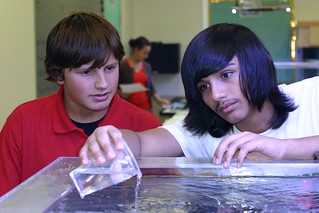 “They are definitely the best and brightest Florida has to offer,” he said.

Martinez currently helps teach aquaculture in 18 schools. He also presents aquaculture information to approximately 9,000 third graders each year during Ag-Venture, a series of hands-on field trips at the fairgrounds in the Tampa Bay area that give students the chance to learn about where their food originates.