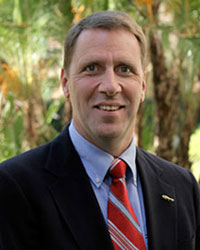 Florida Sea Grant director Karl Havens has been confirmed as a member of a National Academy of Sciences committee that evaluates progress on the Comprehensive Everglades Restoration Plan, the multibillion-dollar effort underway in south Florida to restore historic water flows to the Everglades.

As a member of the Committee on Independent Scientific Review of Everglades Restoration Progress, or CISRERP, Havens will join an ongoing panel of 13 other prominent scientists from across the U.S. tasked with monitoring progress toward Everglades restoration and assessing scientific or engineering issues that may hinder the effort.

Havens is a professor of aquatic ecology in the fisheries and aquatic sciences program at the University of Florida, and has been studying aquatic ecosystems for 34 years. He was named to the panel because of his expertise working with the greater Everglades ecosystem, in particular Lake Okeechobee. His research program that is focused on how natural and human stressors affect aquatic ecosystems. Before arriving at UF in 2004, he was the chief environmental scientist at the South Florida Water Management District.

The committee plans to meet next in late September in Miami, and Havens says he is excited to give input into a project considered crucial to the state of Florida.

”The Everglades is a precious and unique natural resource of the United States. It has been heavily impacted by human actions since before the 1950s and is suffering from a lack of clean water. At the same time, projects that took water away from the Everglades are polluting coastal estuaries with nutrient-laden runoff,” he said.

“The region needs a comprehensive restoration project that deals with these issues and also with the effects that climate change might have on outcomes of projects identified to address them. It is an honor to bring my own experiences and knowledge to bear with this outstanding committee in order to help guide the Everglades restoration program toward success.”

The CISRERP has published a review of Everglades restoration progress every two years since 1996. Copies of each review, as well as current committee member biographies can be found at this link: Independent Scientific Review of Everglades Restoration Progress Project Information.