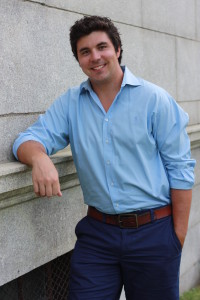 Austin Gallagher, a 2011 Florida Outdoor Writer’s Association scholar and a 2012 Florida Sea Grant scholar, has recently been named to the Forbes 30 Under 30 list in science for his work as an ocean scientist and talented communicator.

The 29-year-old is being recognized in Forbes for his entrepreneurial work as the CEO and president of Beneath the Waves, a non-profit he founded to advance the conservation of sharks and oceans through research, education and media, such as documentary films. But, the recognition is also related to his work as a shark researcher.

“With over 30 published studies under his belt in a few short years, Gallagher is already making an impact in the area of conservation biology,” read the Forbes excerpt.

“A lot of that work is focused on advancing the conservation and ecological understanding of sharks in the Atlantic and Caribbean,” Gallagher said.

One of his most notable studies measured the stress response in different species of sharks after they were caught and released. His work has been used by the Florida Fish and Wildlife Conservation Commission to help inform fishery policy. Gallagher helped communicate the results of this study through the Florida Sea Grant Shark Catch and Release website by producing video and writing the copy for the webpage.

He said that the funding from Florida Sea Grant helped make this work possible.

“I was fortunate to be funded as a doctoral student, which allowed me to conduct research that helped me complete an awesome dissertation that has been highly cited and used by local, national, and international policy makers,” Gallagher said.

Gallagher is currently a postdoctoral researcher at Carleton University where he is studying the links between behavior and physiology in wild animals, with a focus on understanding how stress affects the survival and fitness in fish populations. He is also an adjunct assistant professor at the University of Miami and conducts research for the Smithsonian Institution.

“I think my ability to wear so many different hats was appealing to Forbes, particularly my ability to be an entrepreneur and effective conservation scientist,” Gallagher said. “But honestly, the biggest reason I think I earned the award was my hard-working ethic and ability to produce in all of my endeavors.”

He said 2016 will be another productive year.

“We have some amazing shark-focused projects coming up in 2016 that will truly change the face of the field,” Gallagher said.  “I look forward to getting deeper into my photography work, getting back into filmmaking, and developing a few startup ideas that bridge nature with other parts of our daily lives.”

Gallagher received his bachelor’s degree in biology from Loyola University in Maryland and his master’s degree in marine science from Northeastern University in Boston. He went on to complete his Ph.D. in ecosystem science and policy from the University of Miami.

To current young scientists as students, Gallagher offers advice to stand out.

“If you want to be a leader, you need to produce,” he said.  “If you are producing content, you are making a name for yourself. Eventually the body of work gets large enough and people notice. Never stop making things.”