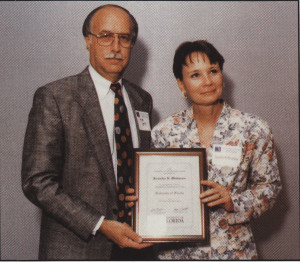 Jackie Whitehouse, Florida Sea Grant’s executive secretary, has retired after 32 years of outstanding service to the program and to the University of Florida.

Since 1984, Whitehouse has served as the right-hand assistant to multiple Sea Grant and associate directors. She has organized research proposal competitions, scholarship programs and countless meetings, review panels and other outside events involving personnel from both within and outside of Florida. She also managed several of the program’s fiscal accounts.

Whitehouse is known by her colleagues as always going above and beyond the call of duty. Because of her positive attitude and hard work ethic, she received two Superior Accomplishment Awards from the University of Florida—one in 1993 and one in 2014. The awards were created by the Florida Legislature as a way to recognize and reward excellence in service to the State University System.

“Jackie is the kind of employee in which you have the confidence that they will do a job right, on time, and with little supervision. She brings distinction to the University of Florida,” said retired Florida Sea Grant Director Jim Cato.

Mike Spranger, Florida Sea Grant’s former director of extension, said the National Sea Grant Program was almost eliminated in the 1980s and 1990s. He said Whitehouse worked diligently behind the scenes to prepare the directors for the meetings in Washington, D.C. to help save the program.

“If it weren’t for these efforts, the program would not have continued to what it is today,” Spranger said. “She is one of the few with an institutional memory and many untold stories about how Sea Grant has progressed over the years.”

Throughout the decades, Whitehouse has left an imprint on hundreds of researchers, thousands of students and many colleagues in Gainesville and throughout the state.

“We give these awards to recognize individual efforts, but they’re also meant to motivate and inspire other UF employees to achieve new standards of dedication and performance,” Zimmerman wrote. “Jackie is the individual that I find myself time and again trying to imitate and follow, both personally and professionally.”

“Jackie has always have been my role model of what an executive professional should be and do,” Seaman said. “Colleagues’ efforts nationally and in Florida, and also overseas for that matter, were enhanced by her diligent and competent contributions.”

“We will miss her incredible commitment, her optimistic can-do attitude and compassion for others in the program and in the university system,” Sidman said.

Karl Havens, director of Florida Sea Grant, who worked alongside Whitehouse for more than eight years, said it’s hard to express in words how much she will be missed.

“Over the years, she has touched the lives of thousands of students, researchers and extension faculty in a positive and caring way. She has been a rock in our program,” he said.

“When I came into the office in the morning and saw Jackie at her desk, I knew that we could handle anything that came our way. Jackie is the most dedicated, compassionate and helpful person I have known and she sincerely loved Florida Sea Grant.”