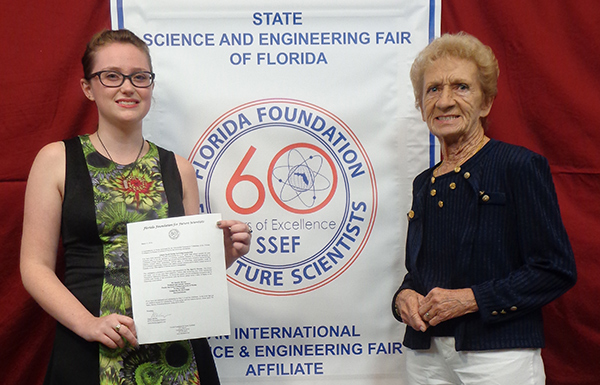 Each year, one outstanding high school senior competing in Florida’s statewide science fair is awarded the Skoch Scholarship, a $1,000 award given to a student who shows research promise in a coastal-related field.

Polen’s award-winning project focused on the effect of warming waters on mussel populations. She conducted her research over the course of three years.

“Mussels attach to rocks using byssal threads, which are protein structures similar to spiderwebs. In my second year of research, I investigated why these threads weaken in hot temperatures,” Polen said.

“My results have shown that global warming could have a detrimental effect on mussel populations, as they are more easily dislodged with weak byssal threads. And, once they’re dislodged, they’re more than likely going to die, decreasing mussel populations.”

This year, Polen shifted her focus to invasive mussel species. She investigated whether easily-available enzymes would be able to control the spread of invasives like zebra mussels in New England, or green-lipped mussels in Florida.

Currently, various anti-fouling paints are used to discourage mussels and barnacles from attaching to underwater surfaces, but the ingredients in the paint have been shown to cause harm to a wide range of marine organisms. She wanted to see if there was an environmentally-friendly alternative.

“I’ve been working with both bromelain and papain, two types of common enzymes, and so far both have proven to be effective when used in solution,” she said. “My trials using paint as the base for the enzyme so far have been inconclusive, as I am still trying to find a suitable paint base for aquatic use.”

Polen, who will be graduating with a 3.9 unweighted GPA, has been accepted into the honors college at the University of South Florida where she plans to major in environmental science and policy. She also plans to earn a graduate degree in the marine sciences.

“I hope to make discoveries that will benefit not only the marine environment, but society as a whole,” Polen said.  “By furthering my education I am provided with ample opportunities to expand my horizons and get research opportunities I’ve only dreamed of. I plan to send my personal education back into the community and inspire others to love and respect science and our natural world as much as I do.”