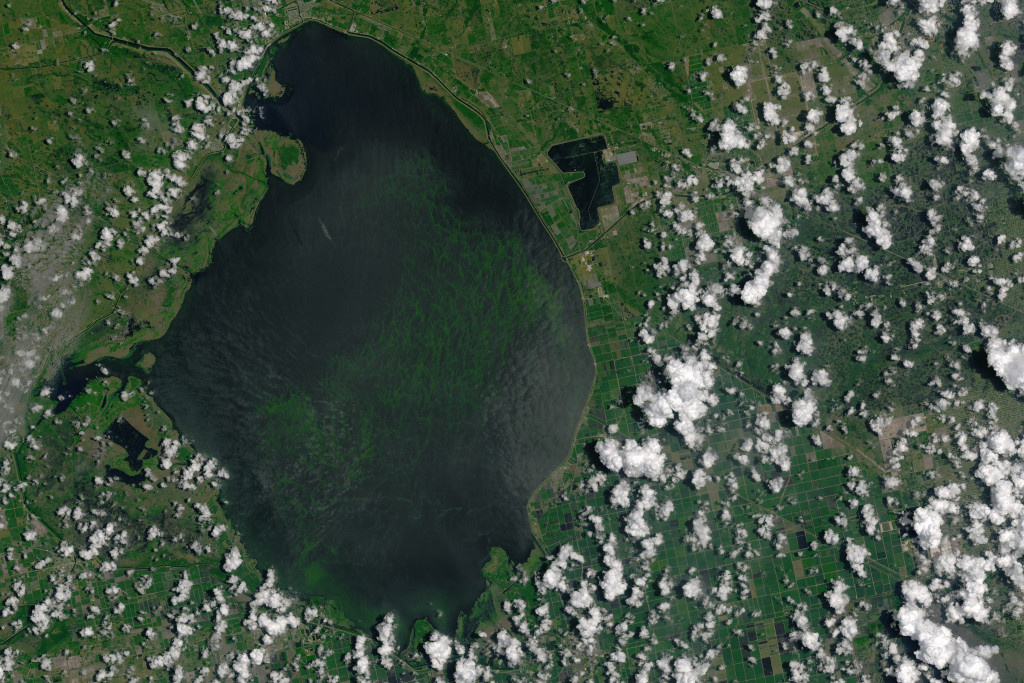 A view from space, showing the massive bloom of algae, which looks like streaks of fluorescent paint across the surface of Lake Okeechobee. The color and physical appearance of this surface bloom is highly indicative of a toxin-producing species of cyanobacteria called Microcystis. Photo source: NASA Earth Observatory

UPDATE 7-21-16: Since this article was first published, it has been confirmed by Florida state agencies that the surface bloom on Lake Okeechobee is largely Microcystis aeruginosa, and that the bloom in the St. Lucie Estuary, which is fed water from the lake, is a mixed bloom including Microcystis and another cyanobacteria called Dolichospermum sigmoideum (formerly known as Anabaena circinalis).

As fresh water exits the estuary, the bloom is also occurring in the nearshore ocean (seaward of Hutchinson Island) at low tide, and has been washing up on beaches.

These two algae are a concern from a public health standpoint, although effects have yet to be quantified. Microcytis produces toxins that affect liver function and Dolichospermum produces toxins that affect the neurological system. It is prudent to avoid any exposure to these blooms, which also can cause skin irritation in people who are sensitive to the chemicals released by the algae.

In the near future, Florida Sea Grant researchers will conduct another rapid-response project to assess toxin levels at locations of high human activity, such as marinas, beaches, and waterfront properties.

Florida Sea Grant is conducting rapid-response research to learn more about the fluorescent green algae that has bloomed in Lake Okeechobee and the St. Lucie Estuary since early summer, posing uncertain risks to aquatic animals, domestic animals and perhaps even people.

The cause of surface blooms of algae in nutrient-enriched lakes like Lake Okeechobee is well-documented in the scientific literature dating back to the 1960s, and in my own research in Florida over the last two decades.

In Lake Okeechobee, which received heavy rainwater inflows over the last year, there also were large inputs of nutrients, in particular nitrogen and phosphorus. Those nutrients lie waiting in the water for the right conditions – hot summer water temperature and calm weather. In many years those perfect conditions for blooms do not happen. The water is turbid from suspended solids, and sunlight cannot penetrate to help algae grow to a level where they form visible blooms.

This year was different. Calm weather allowed suspended solids to settle from the water, allowing enough sunlight for a bloom to begin. Warm water allowed fast growth. The last time that such a ‘perfect storm’ sparked a lakewide bloom was in 2005.

At the same time the bloom was forming in the lake, the U.S. Army Corps of Engineers was releasing large amounts of water from the lake to the St. Lucie River, to lower reservoir levels in preparation for the hurricane season. That process allowed nutrients and algae to move downstream to the St. Lucie Estuary.

While scientists understand what triggers these blooms, there is less certainty about how they keep going. In particular, as they use up available nutrients, where do they get more of the nitrogen that fuels their growth?

Florida Sea Grant hopes to answer this question by calling on some of the world’s leading experts in harmful cyanobacteria blooms.

The researchers will conduct experiments in Lake Okeechobee and the St. Lucie Estuary with funding from Florida Sea Grant to provide information that water managers could use to more effectively model algal blooms. The goal is to develop a model that better predicts algal bloom intensity and duration.

The project will start during the next one to two weeks,and is being done in partnership with the South Florida Water Management District, ensuring that results from research make their way quickly into the hands of water resource managers who regularly use models to predict algal bloom formations and duration.

Blooms like this are a worldwide problem in lakes heavily polluted with nutrients and it recently has been documented that if climate change causes further warming of lake and estuary water, blooms will be more intense. It is easier to control blooms by curtailing nutrient inputs now than it will be in a warmer future.