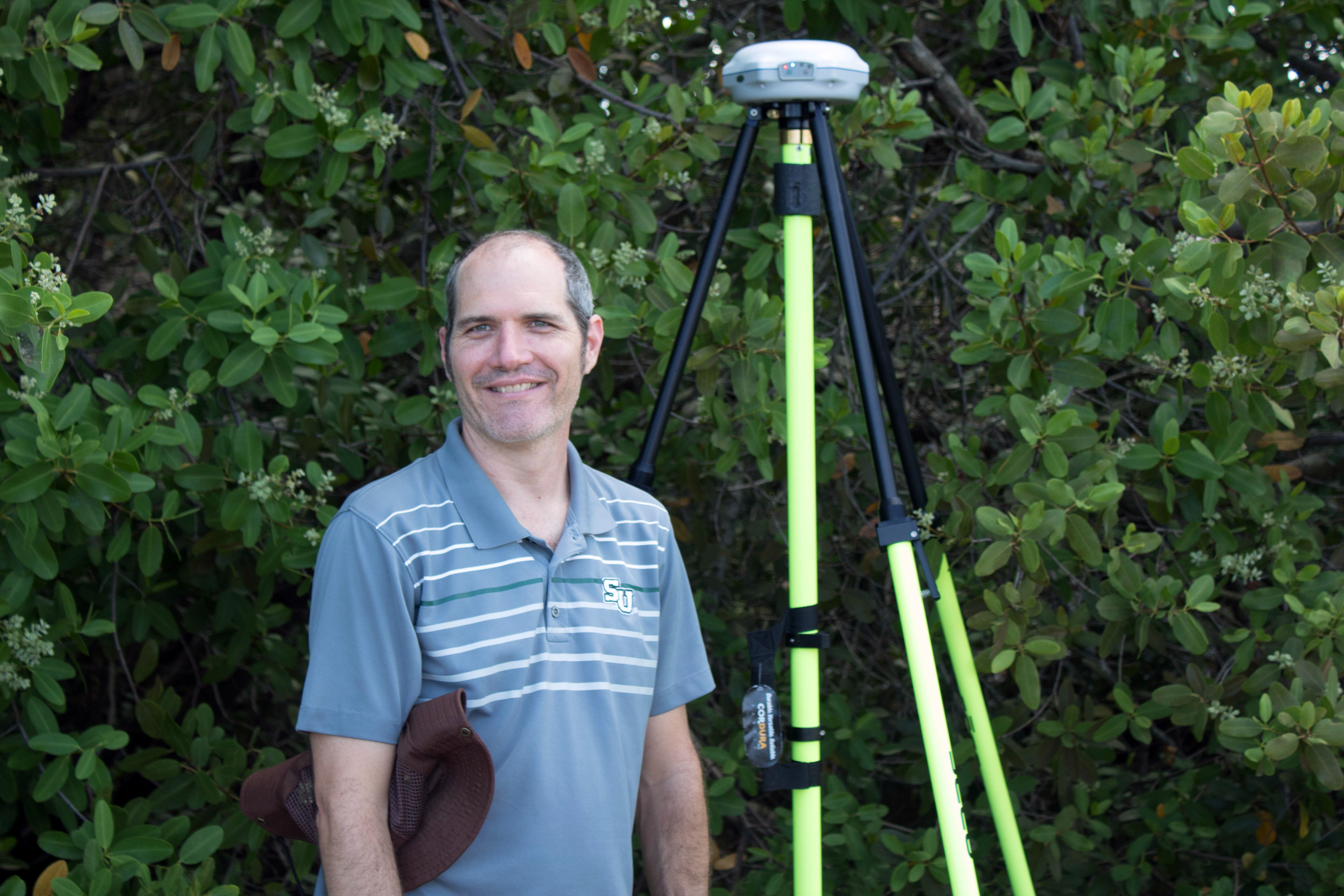 Jason Evans takes his GPS around Satellite Beach and assesses the vulnerability of public facilities to sea-level rise. Photo by Rhiannon Boyer

SATELLITE BEACH — Increased flooding caused by sea-level rise is a growing threat to the homes and businesses in coastal cities around the state. Satellite Beach, a small town on the Space Coast filled with ocean-loving surfers and anglers, is no exception.

In response to this problem, Jason Evans, a Florida Sea Grant researcher, is finding ways for local governments in several cities, including Satellite Beach, to best adapt to sea-level rise. Part of Evans’ research is mapping how vulnerable public facilities such as stormwater drainage systems, fire stations and wastewater treatment plants are to rising seas.

The elevations of the structures he records give Evans an insight into how exposed buildings can be adapted to future floods. He hopes this data will help communities become more resilient to coastal hazards.

“Resiliency is the idea that a community can bounce back from some kind of stressor, some kind of disaster,” said Evans, assistant professor of environmental science and studies at Stetson University. “With sea-level rise, the best thing we can do is just acknowledge it and try to deal with it by planning ahead.”

The research Evans and his team recently published in the prestigious journal Nature Climate Change  found that as many as 13.1 million Americans who live in low-lying coastal areas would be displaced due to sea-level rise by 2100. 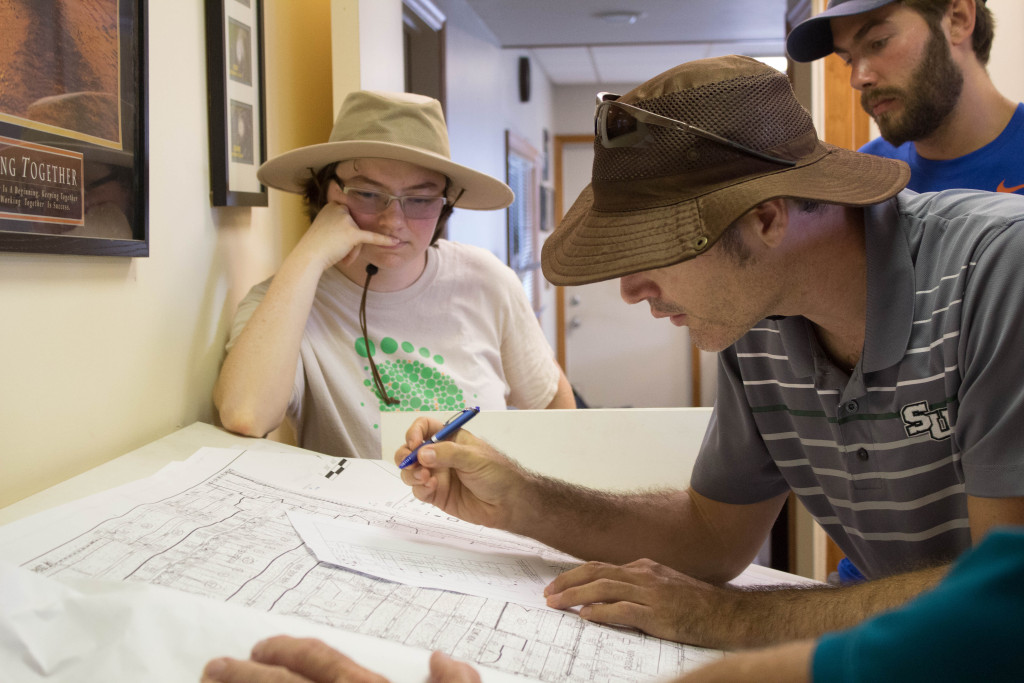 (From left to right) Emily Neiderman, Jason Evans and Adam Carr are mapping out vulnerable areas in Satellite Beach. Photo by Rhiannon Boyer

“It’s basically a collision course when thinking about sea-level rise,” Evans said in an on-air interview with the popular radio show Science Friday. “We’re starting to do studies that say, OK, how much is it going to cost to adapt?”

Evans hopes that the data he collects in Satellite Beach can provide an opportunity to reduce flood insurance costs in some less-vulnerable areas.

“What this work will ideally do is show communities how to use the Community Rating System as a way of planning for sea-level rise” Evans said, referring to the National Flood Insurance Program’s method of encouraging a community to go above and beyond minimal floodplain strategies.

The higher “resilience” score a community achieves through the CRS, the lower the flood insurance rates are across the board for that community. These savings will make sea-level rise seem less controversial, according to Evans.

“For communities that are following the Community Rating System practices there is a real potential to help people save a little bit of money on their flood insurance. And that’s a tangible benefit in the very near term,” Evans said.

Once data collection is complete, Evans will report his findings to the city manager and public works director of Satellite Beach. Local officials can then use the findings to improve flood hazard and infrastructure planning that earns Satellite Beach additional credits in the CRS. 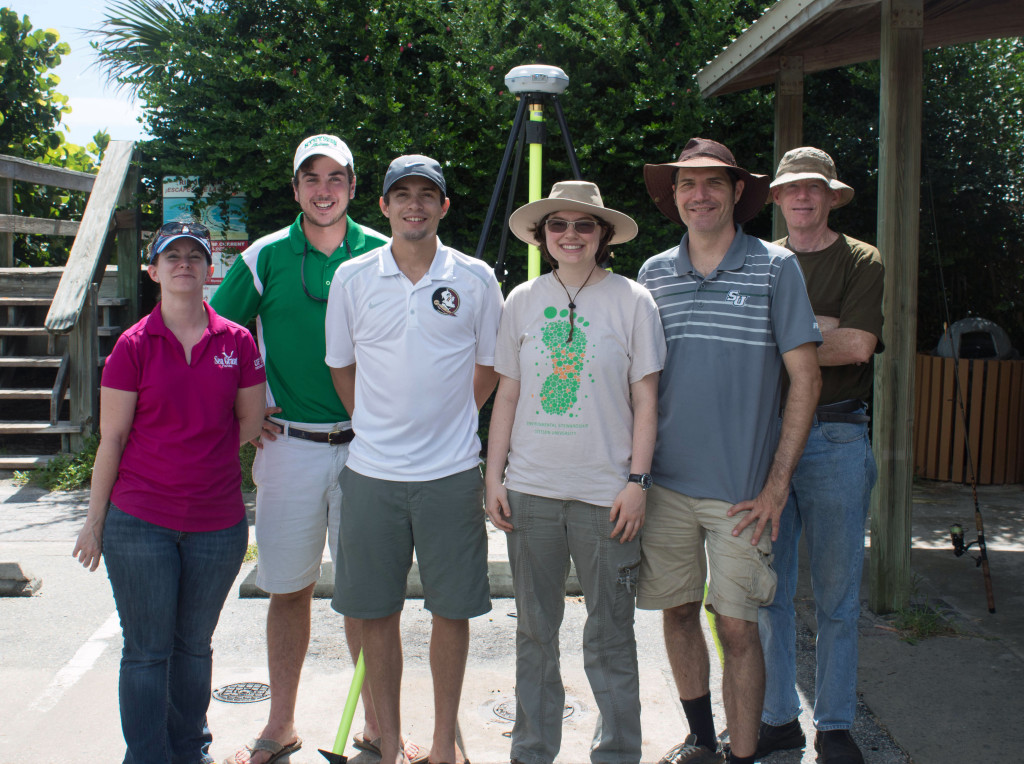 “I think the reaction that we would like to get from the community is that we’re trying to solve actual problems,” Evans said. “They already have flooding issues in Satellite Beach. We know there is such a thing as sea-level rise because we see it and we can measure it.”

Evans, an interdisciplinary systems and landscape ecologist, worked as a research scientist and sustainability outreach specialist at the University of Georgia’s Carl Vinson Institute of Government before arriving at Stetson. In his new role as a professor, he hopes to bring his research from the field to the classroom.

“I strongly believe in the liberal arts mission that gives professors the opportunity to provide undergraduate students with high quality teaching and research experiences,” Evans said. “Because I so firmly believe that environmental sustainability is a critical issue for both the present and the future, it energizes me to help undergraduates make connections about the world that are difficult to make inside the classroom.”

This research was also supported by the East Central Florida Regional Planning Council and the University of Florida Geo Planning Center.