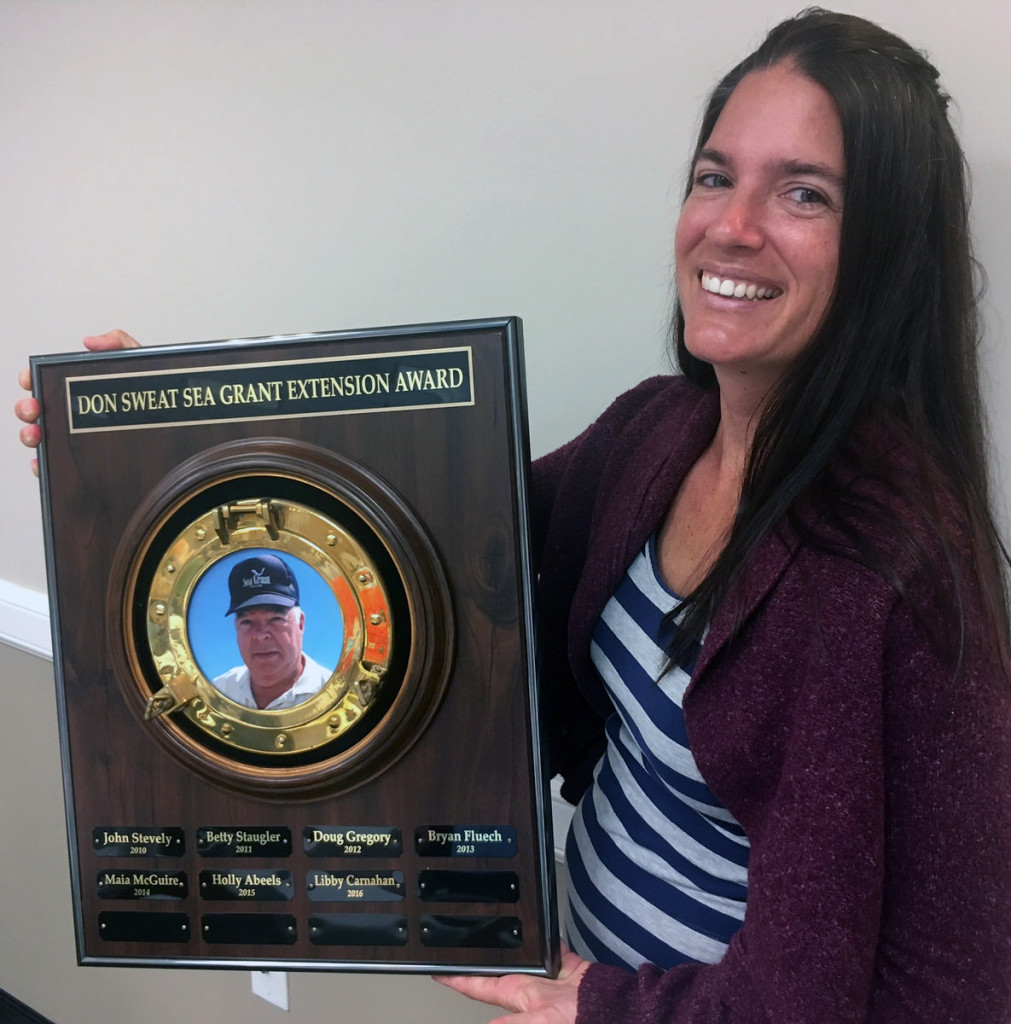 “I am truly honored to receive this award. What makes it so special is that I was nominated by my Sea Grant peers with support from my community collaborators and associates,” Carnahan said. “I love my job and the work I do is truly rewarding.”

The award is presented annually to a Florida Sea Grant agent who takes initiative, creativity and leadership in his or her extension program. In her more than five years with UF/IFAS Extension, Carnahan has concentrated on establishing programs that help protect one of the state’s most developed urban areas from coastal hazards, such as rising seas.

One of her most successful programs is addressing the threat of sea-level rise by bringing together a group of scientists and government officials to incorporate climate change into city and county planning efforts. Through an 18-month process of literature review, invited expert speakers, and facilitated discussion, the Tampa Bay Climate Science Advisory Panel, wrote and published Recommended Projection of Sea-Level Rise in the Tampa Bay Region to inform sea-level rise adaptation planning throughout the region. The report was unanimously adopted by the Tampa Bay Regional Planning Council and distributed to local governments.

“In just over a year, Libby guided this very eclectic group to a consensus that resulted in a document that will serve as guidance in our region for planning for future sea-level rise,” said Gary Mitchum, professor and associate dean at the University of South Florida College of Marine Science. “Forming this group and managing to arrive at such a document was truly an amazing accomplishment.”

To ensure that information about regional issues related to climate change reaches the public, Carnahan hosts many community engagement programs. One of her most popular is her Salty Topics: Marine Research Speaker Series, which brings research scientists to a public forum. Since she started the series in 2011, the program has drawn more than 750 attendees.

Lindsay Cross, executive director of the Florida Wildlife Corridor, said Carnahan’s ability to educate at all levels is what qualifies her for this award.

“Equally at home among scientists, citizens and business leaders, she led efforts to address sea-level rise planning at a government level, while also providing a platform for citizens to engage in climate change discussions,” Cross said. “She’s an important connector of people and organizations around the region and always adds a wealth of ideas, experience and energy.”