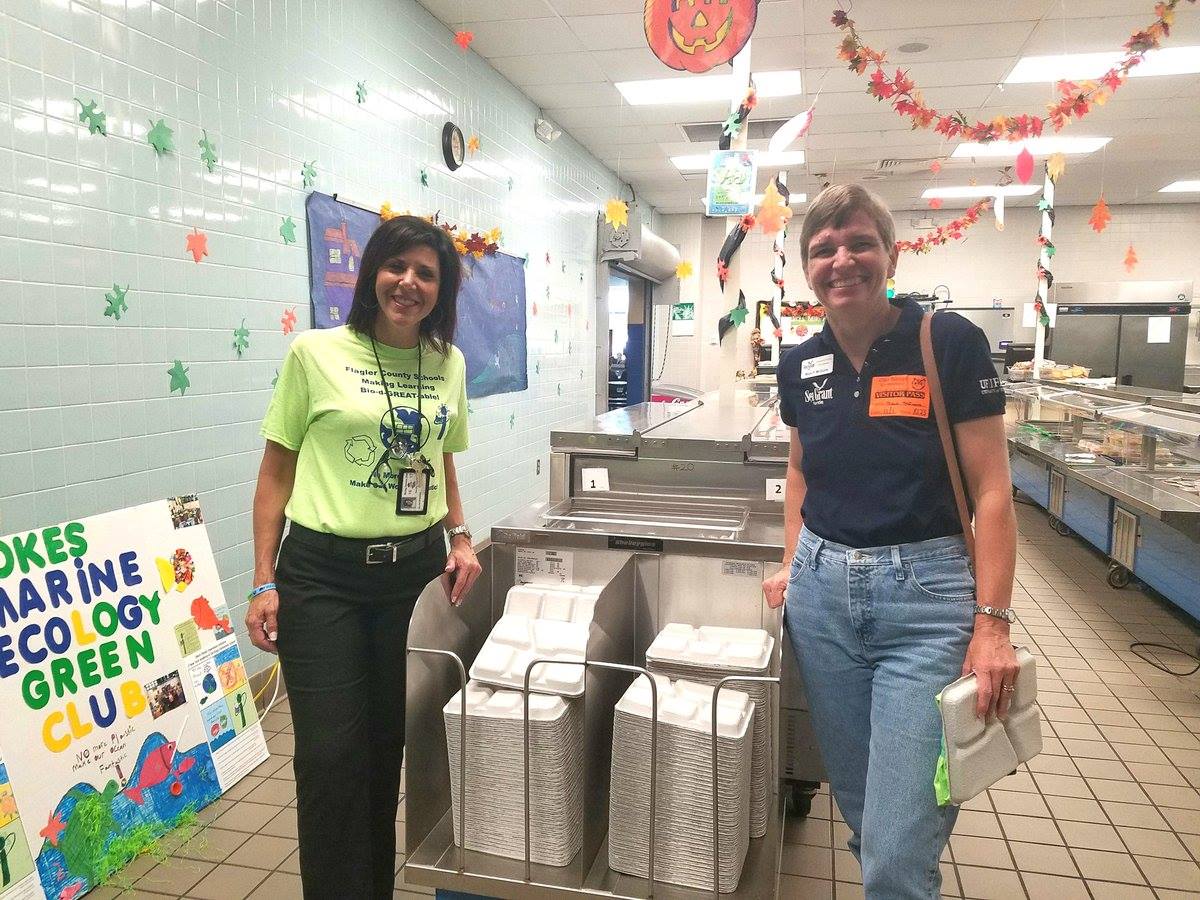 Flagler County schools will now use lunch trays made of recycled paper instead of plastic foam. The initiative to switch was spearheaded by students after learning about microplastics in Florida waters during a field trip with Florida Sea Grant agent Maia McGuire. (UF/IFAS photo)

Editor’s note: This story was originally written by Samantha Grenrock on UF/IFAS News.

The Flagler County School District officially switched to lunch trays made of recycled paper, thanks to the efforts of students, teachers and a Florida Sea Grant Microplastic Awareness Program.

According to organizers, the transition to paper trays will prevent more than 1.3 million plastic foam trays from entering the Flagler County landfill each year.

Called the Bio-d-GREAT-able Project, the initiative kicked off Nov. 1 with a ribbon-cutting celebration at the Old Kings Elementary cafeteria.

The seeds of eco-friendly change were planted two years ago when Maia McGuire, a Florida Sea Grant agent with the UF/IFAS Extension in St. Johns and Flagler counties, first met with two Flagler County teachers.

“Ellen Asher, a second grade teacher at Old Kings Elementary, and Courtney VandeBunte from Flagler Palm Coast High School were looking for an environmentally related project that would involve students from both second and 10th grade,” McGuire said.

“I introduced them to the topic of microplastics and they were hooked,” she said.

During McGuire’s presentations, students learned how tiny pieces of plastic called microplastics can impact marine life. Microplastics are less than 5 millimeters wide, but like all plastics, they can absorb toxic substances from their environment. When animals eat microplastics, those toxins get absorbed by their bodies and into the food web.

“I didn’t know microplastics were a problem, so I was sad and angry that the sea animals were getting sick. I wanted to make a change that would help the animals,” said Stanislav Valenteychik, a student in Asher’s class.

Later in the semester, the second grade class met McGuire at a local beach where they could observe microplastic pollution first hand.

McGuire planned an activity where students combed plots of sand for microplastics, using tweezers to collect and count the tiny pieces. At the end of the day, students were able to calculate how much plastic they could expect to find per square foot on the beach.

“This was the ‘aha’ moment for the students. They were able to make the real-world connection that led to an interest in solving this global environmental issue,” Asher said.

Asher’s students soon realized that their lunch trays — which are made out of polystyrene, a kind of plastic that does not biodegrade — were potential contributors to microplastic pollution.

“Students in my class conducted a survey to see how many Old Kings Elementary and Flagler Palm Coast High School students knew the implications of polystyrene and how it stays in the environment for more than 1,000 years,” Asher said. “Following the survey, students in both schools designed and distributed a petition to have lunch trays in our schools changed to recycled paper.”

The students researched tray distributors, did a cost analysis, and performed a scientific experiment on recycled paper trays testing their strength and durability. Data in hand, the students made their case to school district officials, including Angela Bush, director of food services for Flagler County Schools.

“Angela took the students’ request seriously, and used their data in a presentation to the school lunch consortium,” Asher said. Flagler County Schools made the switch, and were joined by Nassau and Indian River counties. Thirty other Florida counties are now considering the same, she said.

“The students have learned how to use their voices to influence a change that is important to them and their future,” Asher said. “I am proud of how ambitious my students are and the extra work they have invested in this project. I am excited about students making a difference in our world, and for the people and animals that inhabit our planet.”