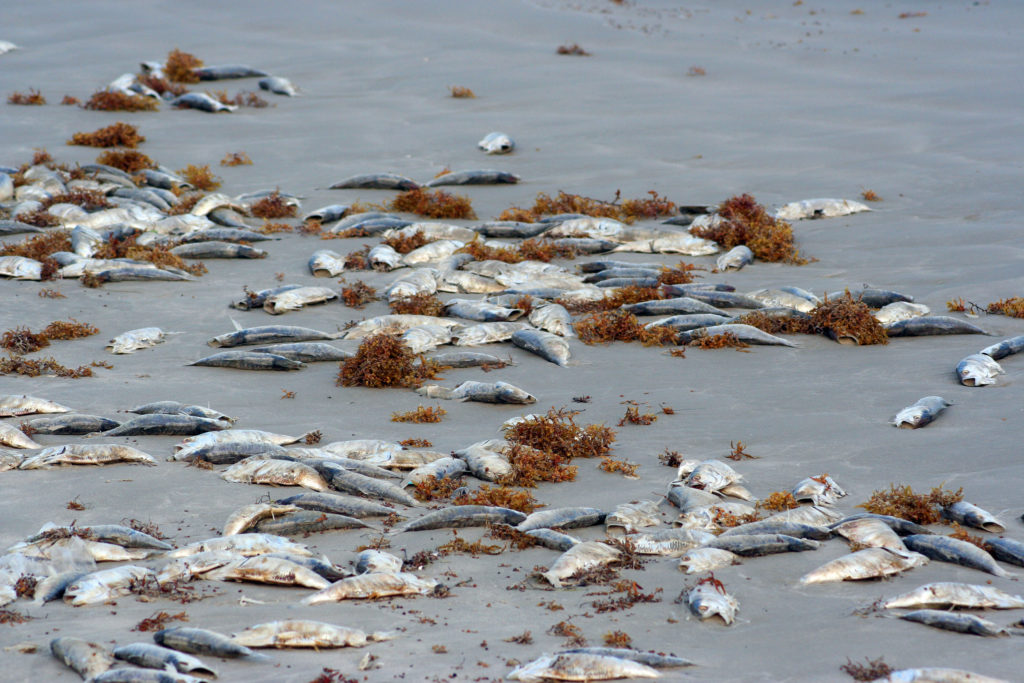 In this Florida Sea Grant file photo, fish killed by a previous red tide litter a beach in southwest Florida.

Update 10/2/2018 — The information presented below pertains to the red tide bloom on the southwest coast of Florida. Red tide is now also occurring along the Panhandle and Atlantic coast of Florida near Palm Beach County. Studies are underway to determine how the red tide has moved to these areas. For up-to-date information on red tide status, visit the Florida Fish and Wildlife Conservation Commission Red Tide Report page: http://myfwc.com/redtidestatus

Editor’s note: This post has been adapted from UF/IFAS Blogs.

This red tide bloom has been trying for everyone. It is hard to see the harsh impacts the bloom has had on our coast, wildlife, and economy. I have been fielding a number of questions about the bloom, its causes and when it might end. See below for answers to some of the most frequently asked questions.

What is red tide? Red tides are caused by a type of plantlike organism called a dinoflagellate, which also is ubiquitous in lakes, rivers, estuaries and the oceans. The particular dinoflagellate that causes Florida’s red tide blooms, Karenia brevis, can literally make water look blood red and occurs primarily in marine waters.

What caused this red tide bloom? While red tides can form around the world, the organism that causes Florida’s red tide, Karenia brevis, is found almost exclusively in the Gulf of Mexico from Mexico to Florida. Red tides have historically formed off Florida even before humans settled here. Scientists know that red tide blooms originate 10-40 miles offshore, and winds and currents bring them inshore. Red tide growth is fueled by nutrients, in particular nitrogen and phosphorus. The sources of these nutrients vary among the offshore, nearshore, and estuarine environment.

Is the blue-green algae in the Caloosahatchee River fueling the current red tide bloom? Possibly. Nutrients from the natural flow of fresh waters along the coast of Florida have always had a probable influence on the extent of red tide. This year is unique — both red tide and blue-green algae are blooming at the same time. This didn’t happen during the 2016 blue-green algae bloom. As a result, scientists currently do not know much about how or if the two blooms are interacting. These studies are currently underway.

Is it OK to eat shellfish or locally caught finfish at a restaurant or purchase them from a seafood market during an algae bloom?

Why has this red tide bloom been so bad? A number of factors are likely at play this year. For instance, higher than normal estuary and nearshore nutrient runoff  could be contributing to the intensity and duration of this bloom. Residents and tourists may also be aware of the Saharan dust deposits that have been blown into the Gulf of Mexico over the last few months. Iron-rich Saharan dust not only gives us brilliant sunrises and sunsets, it also stimulates the bloom of another blue-green algae called Trichodesmium. Trichodesmium has the ability to obtain, or “fix” nitrogen from the atmosphere and convert it to ammonium, where it is then available to red tide cells. Ongoing onshore winds and currents have also kept the red tide inshore much longer than usual.

Did Hurricane Irma play a role in this year’s red tide bloom? Scientists observed turbid waters from nearshore to approximately 30-40 miles offshore for several months after Hurricane Irma. However they don’t specifically know what role this played in the present bloom, if any.

Is this the worst red tide bloom on record? I guess that depends on how we define “worst.” This is definitely a significant red tide event with serious impacts to fish, marine mammals, sea turtles, residents and coastal businesses. These types of impacts are typical during severe red tide events. However, more fish have died during this red tide in Lee and Charlotte counties compared to past severe red tide events, and it’s not over. In 2005, a red tide bloom resulted in a 2000 square mile dead zone in the Gulf of Mexico that extended from New Port Richey south to Sarasota. We haven’t seen that yet, but it could be our future. And, in 2015, three red tide blooms occurred simultaneously — one along the coast of Texas, another in the northern Gulf of Mexico from Louisiana through the Florida Panhandle, and a third in southwest Florida. Each of these could be described as unprecedented.

What can we expect as our climate changes? Warmer water due to climate change is predicted to cause algae to bloom more often, more intensely, and in more water bodies. Due to the synergistic relationship between increasing water temperature and nutrients, climate change will also make it harder to control blooms once they’re initiated. It is imperative that we reduce nutrient inputs to our lakes, rivers, estuaries and coastal ocean waters today.

Is this our new normal? There is no evidence that this is a trend – next year there may be no blooms.