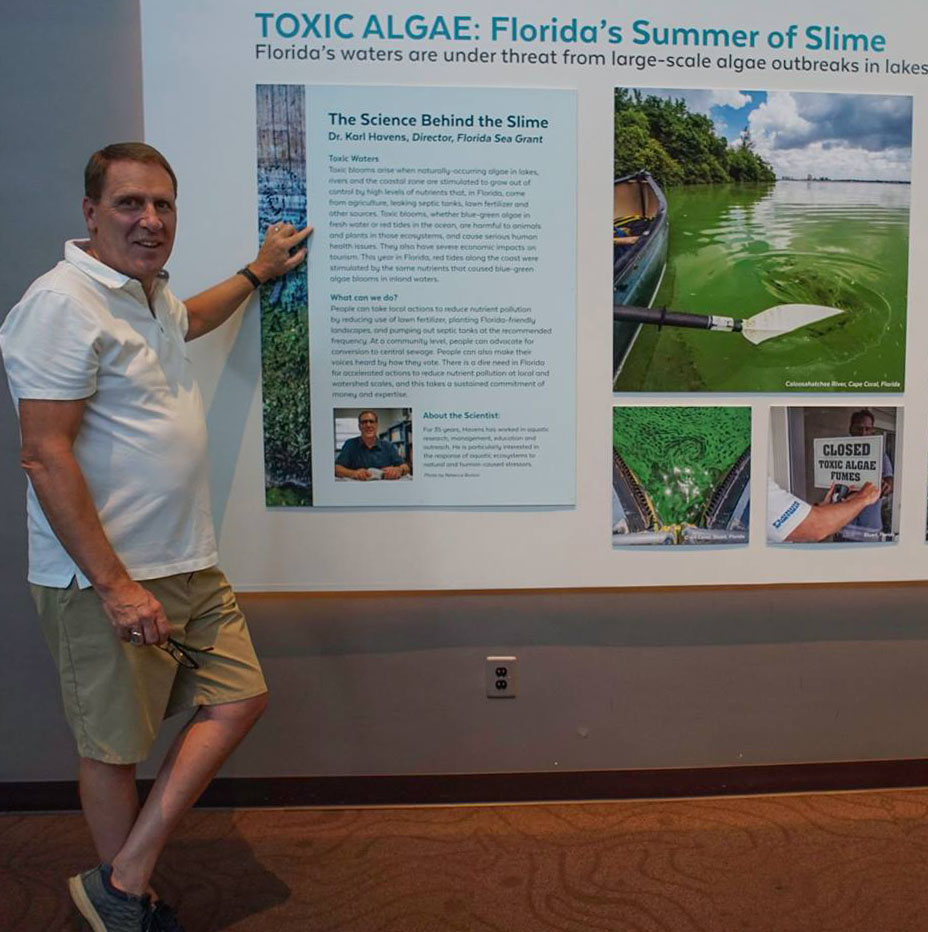 Karl Havens was the scientist behind a 2018 Florida Museum of Natural History exhibit titled “Toxic Algae: Florida’s Summer of Slime,” that chronicled the science behind the red tide and blue-green algae blooms that plagued Florida waters that same year.

The University of Florida and the UF Institute of Food and Agricultural Sciences regret to announce that Karl E. Havens, the director of the Florida Sea Grant program since 2007 and a professor of aquatic ecology at the University, died suddenly of cardiac-related issues at his home on Friday evening, April 26, 2019. He was 61.

Havens was a leading international expert on aquatic research, management, education and outreach. His area of expertise included the response of lakes and estuaries to natural and human-caused impacts such as nutrient enrichment, drought, climate variability and hurricanes.

“Karl was a visionary who could help others see as well. He often did it with photographs. He always did it with the excitement in his voice when he talked about science,” said Jack Payne, UF senior vice president for agriculture and natural resources.

“His passion was a great contribution to science because he inspired others to discover, too.”

On Monday, April 29, he was to have been announced as a member of Florida Governor Ron DeSantis’ blue-green algae task force, formed to ensure science was used to prioritize the state’s response to its water quality issues.

Havens was named interim director of Florida Sea Grant in 2007 and director in 2008. His achievements include the creation of the biennial Florida Sea Grant Coastal Science Symposium, the formation of the program’s first advisory council in 2009, and the leadership of the university’s oyster recovery team that addressed the collapse of the commercial oyster fishery in Apalachicola Bay.

Most recently he was leading the UF/IFAS Harmful Algal Bloom task force, an effort that applies the University’s considerable research and outreach expertise to the blue-green and red tide algae blooms affecting nearly every body of water in Florida.

“We are extremely saddened to hear of Karl Havens’ passing,” Pennock said. “Karl was a trusted colleague and a leader among leaders in the Sea Grant program. He was a talented and active scientist, and his passion for science translated into his superb leadership of the Florida Sea Grant program. I and the rest of the National Sea Grant College Program send our deepest condolences to Karl’s family, friends, and large network of professional colleagues.”

Havens earned his B.A. in biological sciences from the State University of New York at Buffalo in 1979, and his master’s and Ph.D. in biology from West Virginia University in 1981 and 1984, respectively.

Before joining the University of Florida as professor and chair of the department of fisheries and aquatic sciences, he served as chief environmental scientist at the South Florida Water Management District from 1993-2004, where he became one of Florida’ s most respected voices on the science behind the management of Lake Okeechobee and the Everglades.

He has published more than 160 peer-reviewed journal articles and 20-plus extension publications. His latest papers reflect collaborations with international scientists about the effects of climate change and eutrophication on lakes and estuaries, the future of controlling harmful blooms in the face of climate change and the role that nitrogen pollution plays in stimulating toxic blue-green algae blooms.

Havens was a member of the National Academies of Sciences, Engineering, and Medicine committee that evaluates progress on the Comprehensive Everglades Restoration Plan. He was also a member of the board of directors for the Florida Ocean Alliance and the Florida Institute of Oceanography.

He was the 1999 recipient of the Edward Deevey, Jr. Award from the Florida Lake Management Society, given to individuals contributing to the scientific understanding of Florida’s water bodies. He served as associate editor of the research journals Hydrobiologia and the Journal of Plankton Research.

An avid amateur photographer, Havens founded a Facebook community titled Photography with Classic Lenses that grew to more than 11,600 members. He created and co-hosted the Classic Lenses podcasts that were listened to by thousands of amateur and professional photographers around the globe.

Havens is survived by his wife, Pam, and son, Andrew. A celebration of life will be held on Thursday, May 2 from 3-6 p.m. at Cypress & Grove Brewing Company located at 1001 NW 4th St. in Gainesville.

In lieu of flowers, the family would prefer donations to the Down Syndrome Foundation of Florida: http://www.dsfflorida.org/Donate_to_Down_Syndrome.html.

A funeral service will be Friday, May 10, 2019, in Niagara Falls, NY. Visit this link for details.