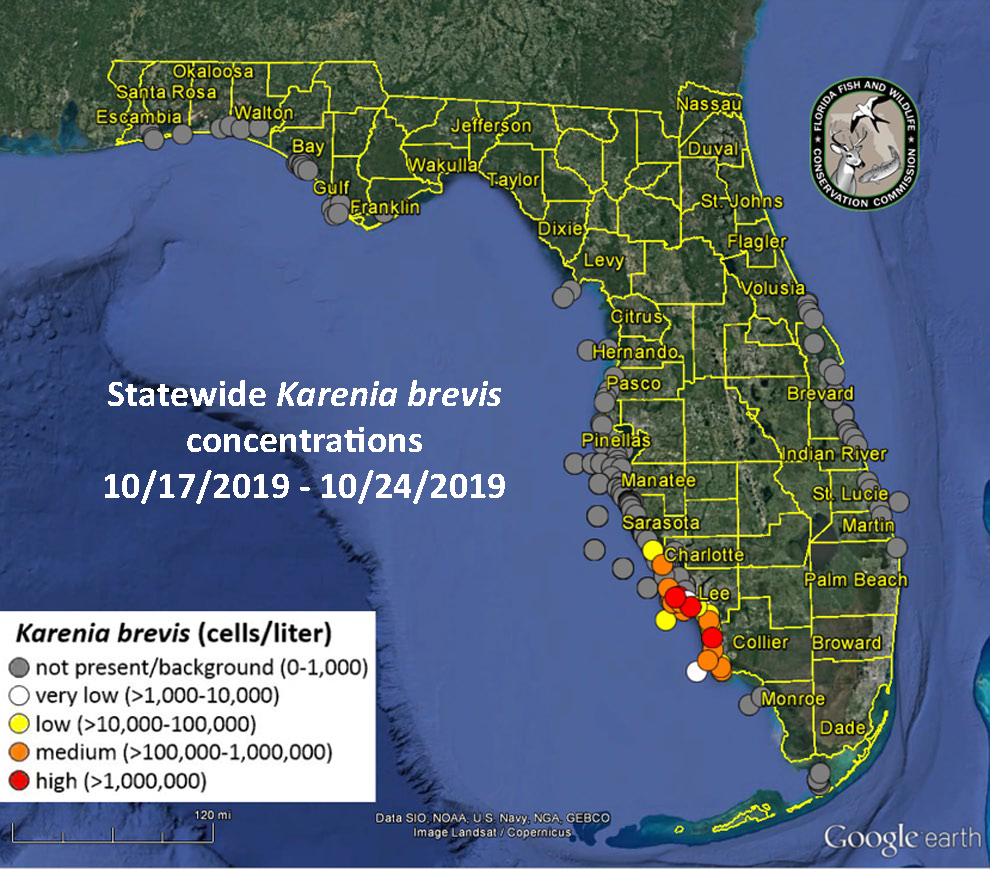 Red tide blooms in the Gulf of Mexico can be expected in the fall almost every year and 2019 is no exception. Karenia brevis, the dinoflagellate species that causes these red tide events, is once again blooming off the southwest Florida coast. Low concentrations of red tide were first detected near Manatee and Sarasota counties in August; however, these cells have dissipated to background concentrations. The current bloom started with low concentrations of cells in Collier and Lee counties in late September. Background to high concentrations of K. brevis have persisted in this area over the last month and the bloom has expanded northward into Charlotte county. A bloom forecast for the next 4 days shows surface waters moving northwestward and minimal transport of bottom waters.

Respiratory irritation has been reported in both Lee and Collier counties during this current bloom. K. brevis produces a toxin called brevetoxin. Brevetoxins may be released into the air when wind and wave actions cause the algal cells to break open. Aerosolized brevetoxins can cause severe breathing problems for individuals with respiratory conditions, such as asthma. Healthy individuals may experience some irritation on exposure, but these symptoms typically subside once they leave the impacted area. Respiratory irritation can occur even at low concentrations of K. brevis and during severe red tide events brevetoxins can be detected 1-2 miles away from the bloom.

Fish kills in Collier and Lee counties have also been reported. K. brevis can cause fish kills in a couple of ways. Brevetoxins can affect the central nervous system of fish, causing them to die and the rapid growth and decay of cells can deplete the water of oxygen, leading to additional fish mortality.

Although red tide blooms are a near annual occurrence, the duration and severity of a bloom differs from year to year. About every 10 years or so, we experience a super bloom. Scientists are not exactly sure what causes this, but they are exploring different hypotheses. We experienced a super bloom during our last red tide event (2017-2019) which lasted 16 months. Super blooms also occurred in 2005-6 and 1994-96. In fact, super blooms have been documented since scientists began tracking red tide blooms. Although we certainly remember the super blooms, it’s interesting to note that in Florida, red tide blooms have occurred 57 of the last 66 years.

There’s really no way to predict how bad this current bloom will get or how long it will last, but there are a number of resources available to readers to help them make informed decisions when planning outdoor activities.

Forecasting tools have been developed that predict respiratory irritation due to red tide blooms: Gulf of Mexico Harmful Algal Bloom Forecast and where a bloom may move over the next four days: Red Tide Prediction and Tracking on the West Florida Shelf.

During a harmful algae bloom event, the National Oceanic and Atmospheric Administration also issues twice weekly forecasts using satellite imagery and other data to monitor blooms and the potential for impacts.