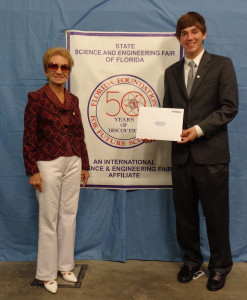 Each year, one outstanding high school senior is awarded the Skoch Scholarship, a $1,000 award given to a Florida high school student who shows research promise in a coastal-related field.

This year’s winner, Zachary Loeb, is a senior at Viera High School in Melbourne. He is the son of Jeffrey and Kathryn Jones Loeb.

One class of chemicals of concern are called endocrine disruptors, which are compounds used in making everyday items such as plastic bottles or cosmetics. When disposed of down drains and toilets, they accumulate in the environment and are believed to have adverse effects on the reproductive health of freshwater and marine organisms.

Currently, most wastewater treatment plants do not completely eliminate endocrine disruptors during the treatment process.

“The majority of rivers in the U.S. have male fish with female tissue because endocrine-disrupting pollutants act as estrogen mimickers,” Loeb said.

“This female tissue prevents the male fish from being able to reproduce, and threatens the survival of fish and other aquatic species,” he added.

As part of his science fair project, Loeb demonstrated that fish eggs that were exposed to these hazardous compounds found in wastewater developed at a significantly reduced rate. Those eggs submerged in wastewater treated with Fe-TAML®, a new type of cleanup catalyst that helps break down endocrine disruptors, developed at the same rate as a control group of eggs that were not exposed to the compounds. Loeb concluded that using Fe-TAML® is a successful method of treating water for unsafe chemicals.

Loeb plans to study environmental engineering in college, and has been accepted to three: University of Florida, University of Central Florida and one other private university.

Elizabeth Youngs, Loeb’s science teacher is not surprised by her star student’s win.

“Over the past two years of having Zachary as a science research student, I have witnessed a growth not only in his personal maturity, but also in his research, writing and speaking,” Youngs said.

“Zachary has a passion and zeal for his work and it definitely shines. In the next 10 years it would not surprise me to find Loeb Environmental Services.”