The Florida Sea Grant program regretfully announces the loss of Howard “Grady” Leavins, a self-made seafood distributor who built an oyster sales operation conducted mostly from his car into one of Florida’s leading oyster processing businesses. 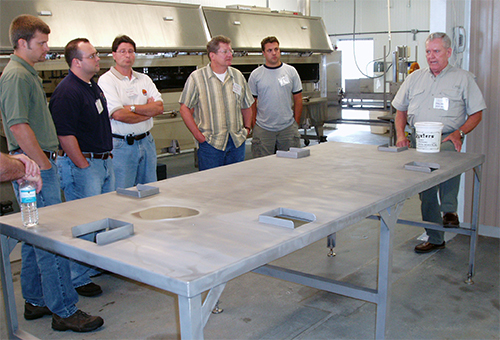 Leavins, 73, was a longtime advocate for the seafood technology research and extension efforts conducted by Florida Sea Grant and UF/IFAS in the Apalachicola Bay area.

In 2004, Leavins Seafood became the first producer in Florida to offer “frosted oysters,” a raw oyster treated with a liquid nitrogen method that virtually eliminated bacterial content while preserving the taste and texture of a fresh oyster.

The post-harvest processing technique was among those developed by Florida Sea Grant to reduce the incidence of serious infections in humans, and help the Apalachicola oyster industry continue and thrive.

“The demand has been wonderful,” Leavins told IFAS News in 2006. “We sold twice as many of them the second year as the first, and I believe we’ll sell three times as many the third year,” Leavins said.

At his plant in Apalachicola, Leavins hosted Florida Sea Grant oyster schools, organized in the mid 2000s to provide seafood buyers and retailers with comprehensive and practical training for marketing raw oysters from harvest to table.

Leavins also participated in a national site review of the Florida Sea Grant program in 2005, telling review team members about the importance of using a coordinated research, education and outreach approach to find scientific solutions to the problems facing the state’s industry.