Both venting and descending devices should only be used when signs of barotrauma are present.

Recent closures of several Gulf reef fish fisheries like red snapper and grouper have focused attention on the importance of successful release of fish caught in deeper water. These fish are particularly susceptible to mortality from barotrauma, the bloat and internal organ damage caused by pressure change. If discard mortality can be reduced, there is hope that the severity of closures and bag limits can be lessened.

Signs of barotrauma include protrusion of the stomach from the fish’s mouth, bulging eyes, bloated belly and distended intestines. Different species react differently. The severity of the problem increases with water depth. Problems can begin to occur in 60-80 feet. At depths over 100 feet, you will probably have to intervene.

The most important concept of improved catch-and-release practices is to get the fish back in the water with a minimum of handling, and as quickly as possible. If a fish can get back down without intervention from the angler, neither venting nor descending are necessary.

However, ‘floaters’ are not a pretty sight. Fish caught from deep water experience significant damage when brought quickly to the surface. When intervention is required, venting and descending gear may be helpful, but they also must be considered options of last resort, because they increase handling and time out of water.

Providing anglers with a variety of options that are best suited to local fishing conditions and practices may be the best solution for improving survival of deep-water released fish. Additional research is needed to learn more about improving release and fisheries management techniques.

Fish descending devices may prove to be a more effective practice as they result in less injury to the fish. Providing anglers with a variety of options that are best suited to local fishing conditions and practices may be the best solution for improving survival of deep-water released fish.

As of April 2013, the Gulf of Mexico Fishery Management Council is considering changing the regulation that requires anglers to vent reef fish caught in the Gulf of Mexico. Use of all types of venting and descending devices is currently permissible in the Atlantic.

Scientists and fisheries managers from across the nation have formed a deep-water release working group to evaluate the especially difficult problem of increasing the survival of fish caught from deep water. The working group members are looking at field trials on the U.S. West Coast and the Gulf of Mexico that indicate the survival of some reef species can be significantly increased using rapid descending techniques that quickly return the fish to capture depth while minimizing injury. On the West Coast, research shows high survival rates for rockfish in depths up to 300 feet. (Watch this dramatic video of the release of a yelloweye rockfish.)

Florida Sea Grant has become part of the deep-water release working group, in an effort to generate information on the usability and practicality of these descending tools and techniques in the Gulf of Mexico and on the Atlantic coast.

WATCH! Catch up on our efforts by watching this webinar, recorded Sept.11, 2013.

It lasts approximately 58 minutes and briefly covers the causes and symptoms of barotrauma; tools and tips for deep-water release, including the latest on fish descending gear; and recent changes to the Gulf of Mexico venting rule and how it will affect your fishing in state and federal waters. 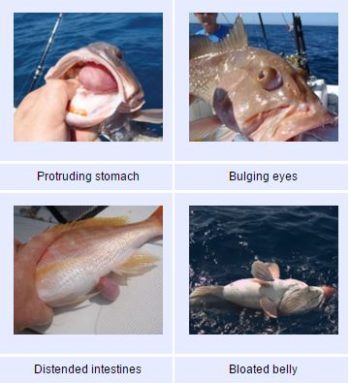 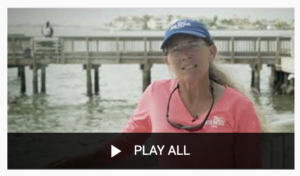 Until recently, regulations in the federal waters of the Gulf of Mexico required anglers to have onboard and use venting tools when fishing for reef fish. As of Sept. 3, 2013, that rule was eliminated so anglers would have more flexibility to choose the most appropriate methods for fishing conditions.

Even though the new Gulf regs don’t require the use of a venting tool, venting still has its role.

Venting releases gases trapped in the body cavity of deep-water reef fish, allowing the fish to swim back to its normal habitat depth. Fish venting can be a useful method for returning fish back to depth. Evidence has shown that it can be helpful for some species, but the research for many other species is either lacking or inconclusive.

Reef fish taken from depths of 50 feet or more may undergo expansion of the gases in the swim bladder as they are brought quickly to the surface on hook and line. Swimbladders can expand only so far before they burst. When the swimbladder bursts, the gases escape into the fish’s body cavity, where they can continue to expand.

The pressure exerted by the gases on the fish’s internal organs is considerable, and can result in serious injury to the fish. Often the pressure is sufficient to push the stomach out of the mouth, and the intestines out of the anus.

Moreover, if the fish is released in this buoyant condition, the fish may float away and die from exposure to the elements, or become an easy target for predators.

Visit the Florida Sea Grant webpage on Fish Venting for a complete description of venting, tools and regulations.

Visit the FishSmart.org website for a summary of deep-water release workshops since March 2011.

The Gulf Council has a comprehensive summary of release mortality research.