A circle hook is a fishing hook designed so that the point is turned perpendicular to the shank to form a circular shape. The principal advantage to using circle hooks is that fish are almost never deep-hooked – research has found that circle hooks are more likely to hook a fish in the mouth rather than the gut, making them easier to remove and reducing harm to the fish.

The principle behind the hook is simple: after the hook has been swallowed the fisherman applies pressure to the line, pulling the hook out of the stomach. The actual curved shape keeps the hook from catching in the gut cavity or throat. Instead, the hook slides toward the point of resistance and embeds itself in the jaw or in the corner of the fish’s mouth.

Regulations change often, so know the rules before you go.

Florida State Waters of the Gulf of Mexico Required Gear:

When to Use Them

How to Use Them

Don’t set the hook! Slowly and steadily reel in the slack in the line until the hook sets itself in the fish. This requires some patience and restraint… patience to make sure the fish has had time to swallow the bait… and restraint in the initial urge to forcefully set the hook. 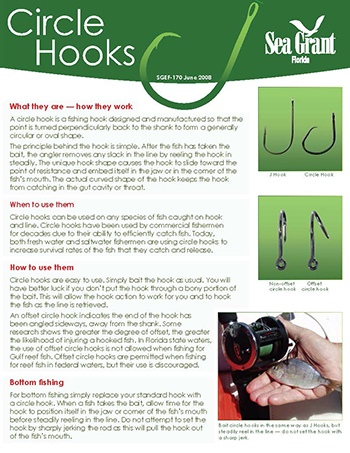 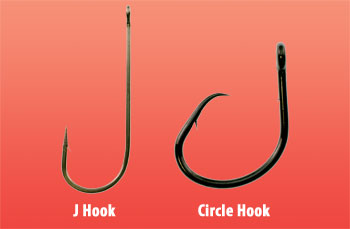 The chief advantage of using circle hooks is that fish are almost never deep-hooked.
Go to Top