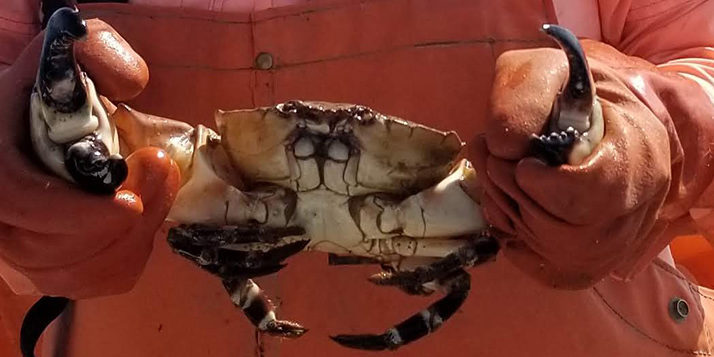 Florida’s stone crab industry contributes $30 million to the state’s economy each year and is one of the most expensive seafoods you can buy. The price and value of stone crab claws are steadily increasing, so researchers are working to ensure the crab population stays healthy and bountiful, while satisfying consumer demand.

Almost all — 99% — of stone crab claws are harvested in Florida and in 2020, stone crab claw earnings came in second, behind only shrimp, according to the Florida Fish and Wildlife Conservation Commission.

Stone crab is unique in that it is a “claw only” fishery. This means that the stone crab claws are harvested by removing the claws from the crab and returning the live animal to the ocean. 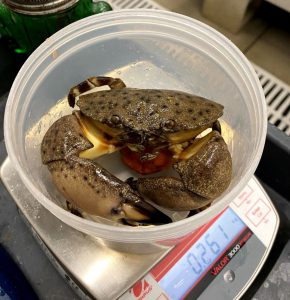 “Because they can regenerate their claws and reproduce after that, people think of them as a renewable resource,” said Katherine Rose, UF/IFAS Extension and Florida Sea Grant agent. “But recent research shows that crab claws are not regenerating at the rate we thought they were, and removal may reduce their chance of survival more than we originally thought.”

Depending on the size of the crustacean’s claw, fishers can take one or both. Recent studies have shown that removal impacts crabs’ behavior and potentially their chance of survival after declawing.

Data show that if you take both claws, there’s a 60% chance the crab will die before it regenerates and 40% if you take one claw. Overall, 13% of them die just from being handled.

Then, consider that the animal’s life span averages six to eight years, and it takes about two years to regenerate a legal sized claw, the fishery may not be as sustainable as scientists originally thought.

“Now that we know more about the impacts of taking the claws, we wanted to understand an earlier part of the catch process when the crabs are trapped,” said Rose. “We were curious if that time spent in the trap impacted the survival rates of the crabs once claws were taken.”

A typical commercial fishery places crab traps approximately 14 days before they pull up the trap to collect the crabs and harvest their claws. However, this time frame can range from three to 35 days.

In that time, some crabs that enter the traps early may go without food. The crabs are often concentrated in traps at larger numbers than normal, which can be stressful. Researchers wanted to understand how this might further stress the crabs and their ability to survive after claw removal.

“The good news is that our study found that crabs fared well in the traps,” said Rose. “While this is the first study of its kind, and a small piece of the overall puzzle to better understand stone crab health in the fishery, we think it’s a good first step.”

Researchers measured nutrition indicators from the crabs’ time without access to food as well as their reflexes to see if their reactions were present as a means of measuring vitality. They saw nutritional decline. Despite that, the crab’s reflexes were fine. 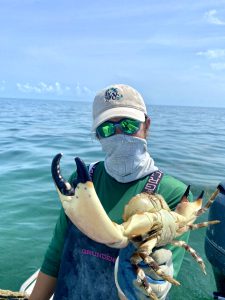 This suggests that the crabs could recover from being in a trap for a long time without food. It’s especially good news for the crabs that are too small for claws to be removed and harvested but may still spend long periods in traps.

“Think of a population model as a machine with settings and dials. You have to adjust the dials to get an accurate prediction for the health of a stock,” said Rose. “This study helped to inform a new dial in the model and will therefore hopefully increase our ability to gauge the health of the stone crab fishery. What we have observed suggests that no drastic changes to the current dials are necessary, but the results are still something that should be considered with other factors that already affect the population.”

There have been a lot of policy changes within the fishery, a season that runs from October to May. In the 2020-2021 season, the legal claw size was increased, and the season was shortened by two weeks. A new law was passed that requires traps to have escape gaps to allow crabs that are not of legal catching size to leave the traps.

“Our hope is that research can provide a better understanding of what negatively impacts these crabs so that we can continue to implement changes that help stone crab populations,” Rose said. “We want to keep populations healthy while also ensuring the fishery continues and can deliver a healthy, delicious seafood product to consumers.”

This project was a collaboration between UF/IFAS, Florida Sea Grant and the Florida Fish and Wildlife Conservation Commission. Special thanks to the Behringer Lab at the UF/IFAS School of Forest, Fisheries, and Geomatics Sciences and the UF/IFAS Nature Coast Biological Station who supported this research.